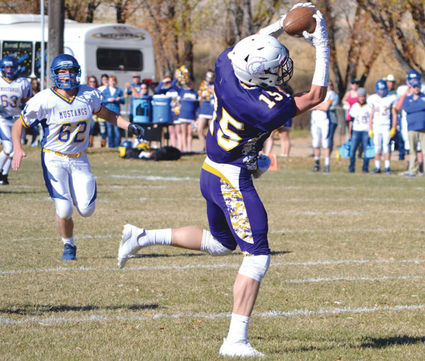 One week after a thrilling 26-18 first round playoff home victory over Shepherd, the Whitehall/Harrison High School football team will once again be at home this Saturday when they take on Shelby (6-3) in a MHSA Class B quarterfinal matchup.

The number one seeded Trojans (10-0) will be matched up with the number two seeded Coyotes in a game that will kickoff at 1 p.m. Shelby advanced to the quarterfinals with a 23-20 home victory over the third seed from the west, Big Fork. With the win, the Coyotes avenged a season opening loss to the Vikings.

Playing in the first home playoff game in 35 years last Saturday, Whitehall/Harrison head coach Dan Lacey praised the large crowd, and is hoping for more of the same Saturday against the Coyotes.

"The atmosphere was amazing. The amount of support that our team is given is absolutely incredible. We are hoping for the same type of atmosphere for this next one coming up. The kids feed off the crowds energy and it makes for a very tough environment for the opposing team," he said.

Looking at the quarterfinal matchup, Lacey said much like his team, Shelby likes to throw the ball. He had high praise for the Shelby offensive unit, including quarterback Aaron White. The Coyotes dropped their first two games of the season without an injured White, but have since won six of seven, only losing 13-10 to eventual North Conference champion Fairfield. In a week three matchup against Malta, White threw for 413 yards and three touchdowns.

The Trojans will also come into the game with a high-powered offensive attack and strong play from the quarterback position. In the win over Shepherd, junior Max Feight was 17 of 32 passing for 296 yards and four touchdowns. For the season he has 2,685 passing yards and 32 touchdowns. He is also the team's leading rusher with 570 yards on 83 carries. Senior standout Wyatt Alexander is the leading receiver for the Trojans with 63 receptions for 1,351 yards and 19 touchdowns.

With a spot in the semifinals on the line, Lacey is aware of the challenge in front of his team.

"We've got our hands full. They (Shelby) are studs," Trojans head coach Dan Lacey said. "But I like our chances because our kids don't have quit in them," he said.

With their season on the line, the Whitehall/Harrison High School football team stepped up with huge plays in the fourth quarter of their 26-18 win over Shepherd in the first round of the MHSA Class B playoffs.

After taking a 19-0 lead into the half, the Trojans would have to fight off a determined Mustangs squad who cut the lead to 19-18 on a 15-yard run by quarterback Jake Trotter with 6:52 left in the game.

The Trojans would stop Shepherd on the two-point conversion to keep the lead and set the stage for one of their biggest plays of the season. On the next possession, Whitehall quarterback Max Feight connected with Wyatt Alexander for a 42-yard touchdown with 5:26 left in the fourth.

Another huge moment in the fourth was when senior Braden Smith returned to the field after suffering a shoulder midway through the quarter.

Smith said it did not feel good to be away from his teammates. He said there was no better feeling than being able to come back onto the field.

Whitehall would force a fumble on the next Mustangs possession and sealed the game with several key first down runs.

Following the game, Lacey said he was very proud of his team.

"There is no quit in them. Mistakes are going to happen. We had to handle the adversity in the second half and be able to bounce back," he said.

The fourth-year Trojans coach praised his offensive line in the final quarter.

"They shut us down pretty good in the running game in the beginning, but when we needed it to show up the most, it did," he said.

It was another strong start in the first half for Whitehall Saturday at Trojans field. Alexander picked off Trotter on the third play of the game, and Whitehall would find the end for the first time when Feight connected with Smith over the middle for a 23-yard touchdown pass with 5:05 left in the opening quarter. 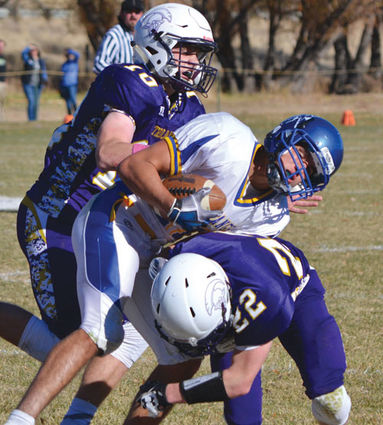 Max Feight and Cade Briggs close in for the tackle.

"That was electric," Smith said about the play. "We knew that play would be open so Max told me he was going to get it to me and it was the perfect connection," Smith said.

Whitehall would score two touchdowns in the second quarter, the first on a 25-yard pass from Feight to Cade Briggs with 9:15 left in the half. He would find Alexander two-minutes later, this time for a 56-yard touchdown.

"They were double teaming Wyatt and he still made big plays," Lacey said.

Kohl Michels would score the first Shepherd touchdown early in the third quarter on a three-yard touchdown. He would find the end zone again in the fourth this time on a 25-yard pass from Trotter.

"It took everybody to win. We had to win all three phases," Lacey said. "And how bout that defense. Two red zone stops. They played their hearts out today."