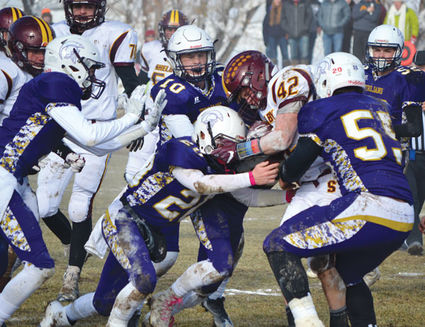 A magical season came to end Saturday for the Whitehall/Harrison High School football team in a heartbreaking 16-13 quarterfinal loss to Shelby.

The Coyotes broke a 13-13 tie with 21 seconds remaining on a 33-yard field by Wyatt Bruvsen to seal the victory.

"You never want this day to happen because of the seniors you are going to lose. The legacy they are going to leave and the mark they set on the school with Trojans football is exciting," Lacey said.

After taking a 7-6 lead into half, and a 13-6 lead into the fourth quarter, Whitehall looked as if they were going to push the lead to two scores, but failed to get into the end zone after a first and goal on the nine yard line. Shelby regained possession after a fourth and goal pass from the two-yard line from quarterback Max Feight fell incomplete with 6:39 left in the game. The Coyotes would march down the field and scored the game tying touchdown on a four-yard run by quarterback Aaron White will 3:35 in the game.

"They (Shelby) made big plays when they had to and we didn't. If you told me they would have not scored from the two and they would have gone and scored on a 98-yard drive I would not have believed you, but it happened. The big thing is they made plays at the end. Somebody had to win and somebody had to lose, and unfortunately it was us," Lacey said.

The Trojans capitalized after a 66-yard Lane Buus interception, and scored the first points of the game on a three-yard run by Sawyer Keener with 5:38 left in the opening quarter. 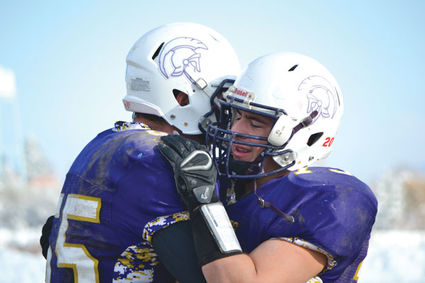 Whitehall's Dawson Hoerauf and Eli Reynolds hug at the end of the 16-13 quarterfinal loss to Shelby.

The Coyotes would score their lone points of the first half in the second quarter when they scored two plays after a Whitehall fumble on a nine-yard touchdown pass from White to Bruvsen. The extra point was wide left to make the score 7-6 with 9:32 left in the half.

Whitehall would come out strong in the second half and scored on a long drive on their second possession on a one-yard run from Feight with 3:56 left in the third.

"I was extremely proud with they way we came out in the third quarter. We chewed up a lot of clock," Lacey said.

Following a year that included an undefeated regular season and a Southern B Divisional Championship, Lacey told his team how proud of them he was.

"It's going to be tough saying goodbye to these seniors, but for the younger kids, next season starts now. They are going to feel this pain, and persevere to use this pain to try and get back here."