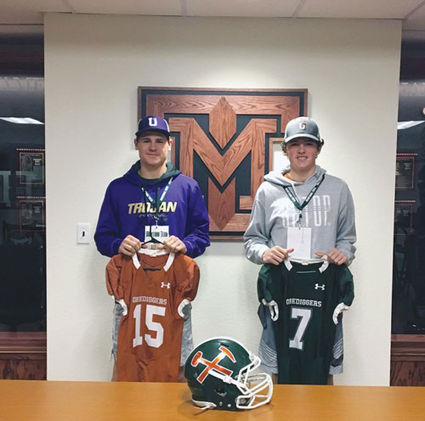 Two of the best players to ever wear Purple and Gold for the Whitehall High School football team will not be traveling far to continue their playing careers.

Signing with the Butte based school was an easy decision for Smith, who shined at tight end, linebacker, and punter for the Trojans.

"When they offered me, I knew that's where I wanted to play. I finally got to sign today on the official visit and it was exciting," Smith said.

After excelling in all-three phases of the game during his high school career, Smith will play defense at the NAIA School. Smith had 179 tackles during his Whitehall career.

"The coach said he wanted me to play outside linebacker, and that's the position that I love!" he said.

Smith was not only drawn to the program because of their winning tradition, but also because of a family like atmosphere.

"During the first year, I'm going to work my hardest and learn all the new stuff," he said.

One of the most accomplished receivers in Montana history, Alexander will be playing the same position for the Orediggers who are known for having one of the most prolific offenses in college football.

Alexander said Tech has always interested him and remembers going to their basketball camps every summer when he was younger -- and loving everything about it.

"And once high school started I began to go to their football camp. They taught me many great things while I was there and I had an amazing time each and every year.

The coaches and players are amazing people and made me feel comfortable when I have been there," Alexander said.

Alexander is also excited about the location of the school.

"It makes it easier for my family to come and watch games. It also makes it easier to see all of my family that lives nearby. I've been to many of their games and I love the crowd that shows up, and also the way the team plays. It seemed like a great fit for me," he said.

During his first year, Alexander said he would like to contribute to the team and community in as many ways as possible.