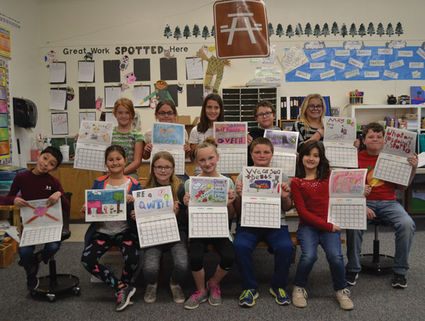 The calendar is currently available for purchase for $5 at the elementary school, Whitehall Ledger office, or from participating students.

For each month in the calendar, a student created artwork that coincided with an event or theme.

The cover art for the calendar was created by fifth-grader Sophia Senst.

Other featured fourth and fifth grade artists featured in the calendar are Mason Miller in January, Jaeden Aragon in February, Michael Leyva in March, Hope Moriarty in April, Savannah Bacon in May, Payton DuBois in June, Jacob Ryan in July, Hannah Frazier in August, Ethan Wock in September, Sawyer Osborne in October, Mikia Julius in November and Rachel Meyer in December. Dubois and Ashley Pettersen also contributed another piece of art for the calendar.

"The kids were very excited to not only work on individual illustrations for the calendar, but to receive the calendars back from the printer as well. The calendar provides meaning and colorful monthly drug prevention messages, and the children who submitted illustrations are pretty proud of the finished product," said Martha Farrand, who works with the 21st Century Learning Center Program.

Jefferson County Prevention Specialist Barb Reiter said she did a brief education session with students in grades 2-5 about what prevention means, and asked the kids how their parents provided prevention guidelines to keep them safe at a young age.

Reiter discussed with students things that can be harmful to them now, listed those items, and discussed the whole concept of choices – healthy and unhealthy.

"Then I told them they would have a chance to make a calendar with some healthy messages about themes for each month. Then the 21st Century staff took it from there," she said.

Reiter has also worked with students in Boulder to complete similar calendars, and stressed the importance to talking to students at an early age about prevention, stating it is never too early to lay the groundwork for healthy choices.

"It is also very important to give information on the topic so it is pertinent to the age level of the child. Dictating really doesn't work well especially as a person ages. That is why healthy choices with emphasis on choices is so important. Students need to be given many opportunities at each level of development to make choices and then experience the consequences of those choices. That is what learning is all about," Reiter said.