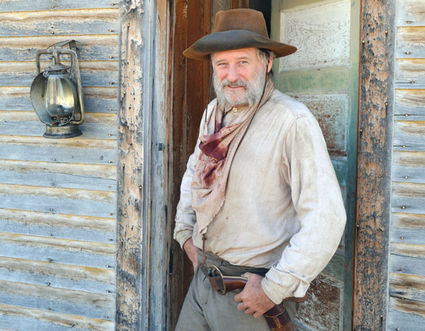 Pictured is Bill Pullman on the set of "The Ballad of Lefty Brown".

Later this month, local residents will not only get the chance to meet actor Bill Pullman and director Jared Moshe at a special premier of the "Ballad of Lefty Brown" at the Whitehall Star Theater, they will also have the opportunity to raise money for the Jefferson Valley Museum.

The theater is hosting a special premier fundraiser on Friday, January 26. The $50 ticket price includes a meet and greet with Pullman and Moshe, admission to the western filmed in Montana, and a reception at the Whitehall Community Center that will include food, a silent auction, picture opportunities, a cigar smoking tent and cash bar.

Star Theater Manager Colton Anderson said he and Pullman always knew they wanted to put together an event for the film, and talked back and forth the past couple months about ideas.

"As we talked, the event just expanded and became the event you see today. We always knew we wanted it to be a fundraiser of some sort, but Bill had the idea of giving the proceeds to the museum. He liked the idea of the film being a nod to the old west, and thought it would be good to help those that preserve that history right here in Whitehall," Anderson said.

The event will begin at 5:30 p.m. with the meet and greet at the theater that will include refreshments. Along with the opportunity to meet the lead actor and director, those in attendance will have a chance to have pictures with three staring horses from the film in the alley behind the theater.

The movie will begin at 6 p.m. and the reception with western heritage fun is scheduled to begin at 8 p.m.

Anderson thinks it will great for Pullman and Moshe to be at the event for a variety of reasons, one being that it's great for people to be able to learn how a film is made and how everything comes together from the writing, to the directing, to the acting.

"It's a long process taking an idea and turning it into a film, and it requires a lot of dedication and hard work. I feel honored to be able to help something as great as the museum. The hard work and dedication it takes to create and maintain such an amazing museum is something we all should be in awe of," Anderson said. "As with the Star Theatre, most towns our size aren't lucky enough to have a museum, and certainly not one of this caliber, and we owe it all to the men and women who brought this museum to life and keep breathing life into every year."

Anderson said the horses that will be on hand are owned by Bryan and Marsha Mussard.

"They offered to bring them down for the event, and they also have this wonderful vodka that they are also bringing down. It just adds one more fun aspect to a night that promises to be a blast," he said.

Tickets can be purchased online by visiting http://www.eventbrite.com and searching for Whitehall or "The Ballad of Lefty Brown, or at the theater during business hours. For more information about tickets or the event email whitehallpremiere@gmail.com. There are a limited number of tickets available and they are on a first come, first serve basis.

The movie was filmed in the fall of 2016 in Montana, with multiple scenes shot at Bannack State Park near Dillon.

In an on set interview, Pullman said his character in the movie has such an unusual premise because he is the sidekick who has been in the shadows of a legendary cowboy, and has never been on his own until the moment the legendary cowboy is assassinated.

"Lefty says I'm going to avenge his death, and everyone around him says you're not the guy that's going to do that, and everything is going to end badly for you," Pullman told the Ledger.

Pullman also stressed the importance of westerns and their importance in today's film making, adding Moshe understands some of the deep roots of the genre.

"I think there is an element of story telling in every genre that can kind of capture something that others don't. Science fiction might be cautionary tales, you know like if we don't do this, the Earth gets destroyed. With westerns, it is kind of a sense of morality and code that either gets reinforced or disobeyed," he said.

Pullman said being able to fold in movie making while in Montana where he spends part of the year on his ranch was a real treat. He was also able to work on the movie with his son Jack, and two friends from Montana he has known for over 40 years.

"It's on the border of surreal,' Pullman said about the experience.

The film also stars Peter Fonda, Jim Caviezel, and Tommy Flanagan. The movie will also be shown Jan. 27 to 29.