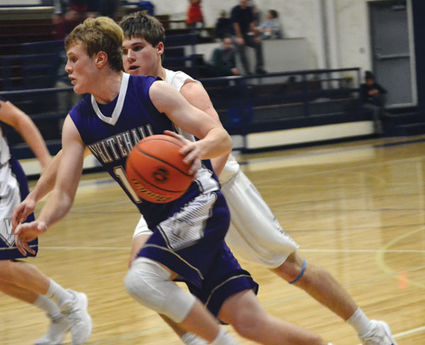 During his time as a player and first eight seasons as head coach of the Whitehall High School boys basketball team, Zach McLean had never left Anaconda's Memorial Gymnasium with a victory. That all changed Thursday night, but it was far from easy.

After trailing much of the game, the Trojans rallied in the fourth quarter and were dominant in the overtime of a 63-50 victory over Anaconda High School.

"It's a nice win for us. I know they were a little undermanned, but any win here is a good win," McLean said shortly after the game.

Whitehall would score the first points of the game on a Ryan Murphy free throw, but struggled to find an offensive rhythm in the first half and trailed 24-17 at the break.

McLean said the Copperheads did a good of disguising their man-to-man defense as a zone, and were really keying on Trojans standout Max Feight.

During the halftime break, McLean said he told senior Wyatt Alexander that when he catches the ball on the wing to refuse his ball screens and to attack the rim. Alexander, who had six points in the first half, did exactly what the coaching staff asked and had a monster second half finishing with a game high 29 points including 16 points in the fourth quarter and overtime.

Feight was also able to come alive in the second half and finished with 27 points. He also had 16 points in the fourth quarter and overtime.

Anaconda was led by another huge game from senior all-state player Braxton Hill, who moved into third place on the Copperheads all-time scoring list with 24 points.

After the Trojans took a 48-45 lead with a little over a minute left in the game, Hill hit a 25-foot off balance three pointer over the outstretched arm of Braden Smith to tie the game.

McLean said they wrote on the chalkboard prior to the game to make the touches for Hill hard, and said Smith did an excellent job defending him. McLean said he told the team good players make tough shots, but it's about how you react to them.

"Keep making him (Hill) shoot tough shots and we will play our percentages," McLean said.

Feight was unable to connect on a last second shot at the end of regulation and the tightly contested game would see another four minutes of play.

The overtime period belonged to the Trojans who outscored Anaconda 15-2 on their way to their eighth victory of the season.

McLean praised the condition of his team in the final period and said getting a win in a difficult place to play was big for the team.

"It was huge for us. We need to be road warriors down the stretch of the season and that will be good for us. It will make us tough in difficult environments," he said.

The Trojans will face another tough road test Friday night when they travel to Boulder to face rival Jefferson High School.

The Whitehall High School girls basketball team could not have asked for a better start to the game Thursday night against Anaconda. The Lady Trojans dominated the opening quarter outscoring the hosting Copperheads 18-9. Whitehall would maintain the nine point lead into half (28-19), but were unable to keep the momentum in the third quarter where they were outscored 18-4 in the hard fought 55-48 loss.

"I loved our start, we were aggressive both offensively and defensively," head coach Kelly Nieskens said. "Dorothy Mastel came to play. She dominated the first half."

In the third quarter of play, Nieskens said it was not about what the Copperheads did to stop his team, it was what Whitehall quit doing.

"We weren't attacking the basket like we did in the first half and Dorothy got in foul trouble. Her being out really changes how we have to play," he said.

Whitehall would fall behind as many as seven (37-30), before taking regaining the lead midway through the final period.

Nieskens praised his team for being able to get back into the game after the run by Anaconda. 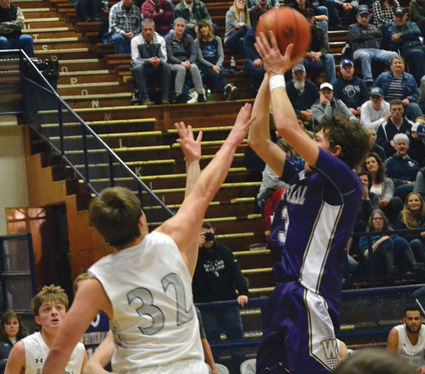 Wyatt Alexander puts up a shot over Anaconda's Braxton Hill.

"We've talked all year about getting tired and being able to push through that and to keep fighting to put yourself in position to win games," he said.

The Lady Trojans were led in scoring by Asha Noyes with 23 points. Mastel was also in double figures with 13 points. Allee Scafani, Hope Slater, Britney Welker and Kendra Klapan each had three points.

Whitehall will be on the road again Friday when they travel to Boulder to play Jefferson High School.

Nieskens said he is loving how the team is headed in the right direction.

"It says a lot about the kids. They are getting the kind of support where people truly believe in them, the coaches believe in them, the next step is for them to start believing in themselves and be that team who will surprise people at the end of the season," he said.