It has been an amazing few weeks for the Whitehall Schools Music Department.

Along with receiving a $250 "One Class At A Time" check from Montana Tech and KXLF TV Station (Butte) and hosting a middle school music festival, the department received more incredible news this week when they were notified of a GRAMMY Signature Schools Award.

Whitehall High School was one of 100 schools nationwide awarded $2,000 to benefit their musical programs. The award is an education initiative of the GRAMMY Museum that seeks to educate and inspire visitors and members through the enduring qualities and cultural significance of popular and classical music.

"The GRAMMY award was a complete surprise to me! I didn't get really excited to start with because I was afraid it might be spam email. I checked out their website and other info along with the principal to be sure it was legit. After realizing this was a real deal, I was mostly overwhelmed. Coming on the heels of receiving a 'One Classroom at a Time' grant from MT Tech/KXLF for $250, this just seemed like too much," Musical director Janet Heilig said.

At this point in time, Heilig is unsure how the money will be spent, but she wants it to have the biggest impact on the most students possible.

"It definitely means that the music program will get to invest in something that wouldn't be possible within the confines of our regular budget," she said. "This is very cool and a big deal for us."

Heilig added the award gives recognition to music programs all over the United States, giving them opportunities to shine and receive music, equipment, etc. that they would otherwise never be able to afford.

Since the program's inception in 2010, the Community Award has provided funding to nearly 800 high school music programs in need in all 50 states.

For additional information on GRAMMY in the Schools program visit http://www.grammyintheschools.com.

ONE CLASS AT A TIME

Heilig was presented a check last week for $250 February 5, and the money will be used to buy music supplies for the department. The money 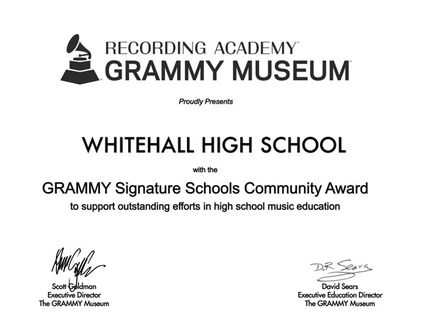 "One Class at a Time" is a joint effort between Montana's News Station and Montana Tech to help fulfill needs of area schools.

Seven schools made their way to town February 5 for the Whitehall Music Festival.

Heilig said the festival was terrific and over 100 students participated.

"The Whitehall students had a lot of success in their performances, bringing home three 'Excellent' scores and 16 'Superior' scores -- the highest score possible. I heard many positive comments from the judges," she said.