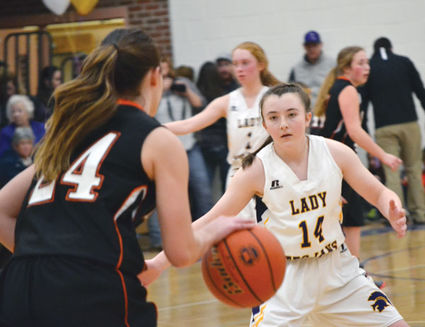 Freshman Macee Patritti locks in on defense against Manhattan.

The Whitehall High School girls basketball will get another shot at rival Jefferson High School (Boulder) when they open the District 5B Tournament Thursday.

The sixth seeded Lady Trojans will play the third seeded Lady Panthers Thursday at the Belgrade Events Center with tipoff set for 4:30 p.m.

The two teams have met twice this season, with Jefferson picking up a 46-37 victory December 16 in Whitehall, and a 49-32 home victory in January.

"As a team I think we match up well with Boulder. In our previous meetings we were able to play well against them, but were unable to put four quarters...