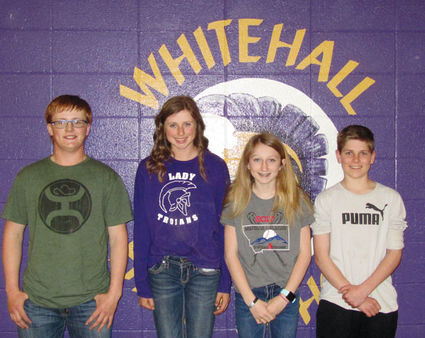 Four freshmen at Whitehall High School have been selected by the Whitehall Rotary Club to attend the July 2018 RYLA Camp.

RYLA (Rotary Youth Leadership Academy) is a long standing Rotary program in Montana that brings together more than 110 high school freshmen from across the state. Campers learn about team building and leadership through a variety of interactive sessions over a 4-day period at Luccock Park Camp south of Livingston. The camp staff is made up of former RYLA campers and Rotarians.

The Whitehall Rotary Club had initially planned to sponsor two students for RYLA. After club president Ed Handl, treasurer Marlene Sanborn, and RYLA director Arlene Weber completed the interviews, they made a recommendation to club members that all four applicants be sponsored. Each student showed a different potential in how they could benefit from attending the camp. Those selected for RYLA 2018 are Garris Robertson, Kyle Ervin, Jacy Johnson, and Meagan Johnson. Meagan's older brother Alex (a WHS graduate) is a former RYLA camper and now a member of the adult staff at camp.

The Whitehall Rotary Club conducts fundraising activities each year that provides the money needed for club projects which include sending students to RYLA, high school scholarships, bike safety classes and dictionaries for third graders, sponsoring the high school Interact Club, and awards for the high school MBI program. The club meets on the first and third Monday evening of each month at the Methodist church and conducts a community service project on the second or fourth Monday.