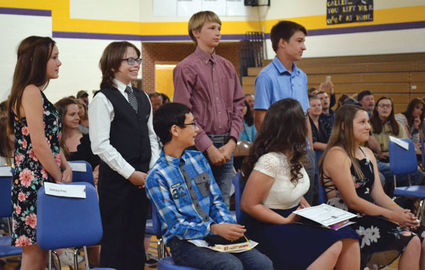 Above, eighth graders wait to go on stage to pick up their promotion certificates. Middle, Class President Adam Williams addresses the crowd. Below, pictured are members of the Whitehall High School Class of 2022. Ledger photos by Melissa Jenkins

As the Whitehall High School Class of the 2018 ventures out into the world, a new class in ready to start their journey. The Class of 2022 took their first steps to earning their diplomas at last week's Eighth Grade Promotion. 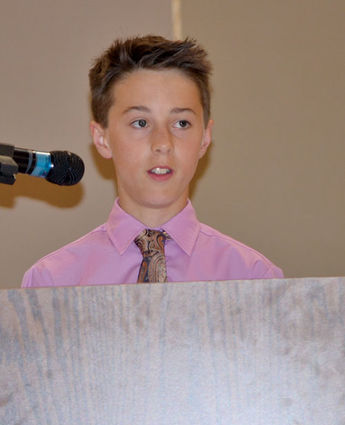 Principal Hannah Nieskens said after nine years of school, the kids have only four years remaining. Class President Adam Williams also addressed the crowd and told the audience and classmates he was honored to speak and discussed the pros and cons of middle school. He opened his speech with a quote from Mark Twain that said if "you eat a live frog in the morning and nothing worse will happen to you the rest of the day". Williams laughed and told the audience he had been waiting all day to swallow that live frog.

Along with their certificates of promotion, the students also received a t-shirt and special award picked by their classmates.