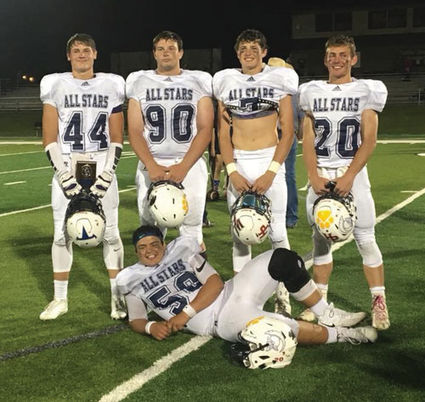 Pictured are seniors members of the Whitehall/Harrison High School football team who played in the Class B All-Star game. In the back are Braden Smith, Dawson Hoerauf, Wyatt Alexander, and Lane Buus. Pictured in the front is Kayden Howser.

Under a bright spotlight, five members of the Whitehall/Harrison High School football team put on quite the performance at last Saturday's Class B All-Star game in Billings.

Seniors Wyatt Alexander, Lane Buus, Dawson Hoerauf, Kayden Howser and Braden Smith all played key roles for the South team in the 25-12 victory over the North squad. Smith was named the Defensive MVP for the South, and finished the game with an interception, fumble recovery, and blocked punt. Alexander also had a huge game for the South. He had two touchdown catches including a phenomenal one-handed catch in the thir...