Exploring the diversity of the Tobacco Root Mountains 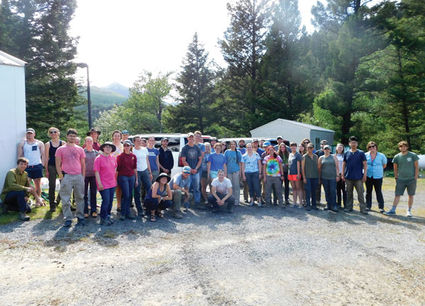 Summer students at the Indiana University Geological Station in the So. Boulder area of the Tobacco Root Mountains take a moment to clean up their cars before a well-deserved night off. Photo by Catheirne Ellerton

Forty-one students from thirty different schools across the United States are taking part in the current Indiana University's summer Geology course, explained Bruce Douglas, the Academic Director. Indiana University has had a presence in the So. Boulder area for almost 70 years. Douglas has been part of that intrigue with the Northern Rocky Mountains geological diversity for 32 years. The rock history in this area spans 3.5 billion years; the limestone cliffs' history goes back 350 million years and the rocks under Whitehall date back 30 million years.

During the summer months students from Hong Kong, the U.S. Forest Service, Indiana University, non-profit groups and some other college groups come to explore this area. Their studies take them into the North Boulder Valley, the Tobacco Root Mountains, Sandy Hollow (near Dillon – which houses special Geological features along the Big Hole River) and N. W. Montana along the Sun River Canyon area where the river cuts through the Sawtooth Range allowing the students to see the interior of the mountain range from down below; and on to Glacier National Park.

This reporter caught up with the students at the end of a long day of hiking and studying at the weekly car wash before they went for 'a night on the town.' Alana Basso from Potsdam, New York, goes to Suny Potsdam State University of New York where she is in her senior year as an Economic Geologist. She hopes her future will be involved in Petroleum and Mining Geology. This is her first time in Montana and she finds the area very unique in the glacier activity to the north and the carbonate deposition in the area of the Tobacco Roots caused by the sedimentary rocks.

Jimmy Atterholt of Indianapolis and Ross Tepe of Elkhart, Indiana, laughingly stated they were wandering around Mount Doherty involved in a mapping project when they realized they had wandered a bit far and were lost! They were intrigued with the area and kept walking and finally came upon the road and met up with the rest of the group. These students are in their junior year at Indiana University and are currently enrolled in the required 6 weeks Geology Course at the Indiana University Geological Station in the Tobacco Root Mountains.

From Bend, Oregon, Olivia Moehl has been to Montana before but finds this a very "cool" area to be in as it is fun to be in the middle of all the Geological diversity. She attends Amherst College in Massachusetts where she will be a junior next year and plans to continue to study for her Geology degree with professional aspirations in the future.

David Ray from Bloomington, Indiana, is a junior in college and is still deciding whether to go for his Masters Degree. He enthused that it was intriguing to realize the rocks you were looking at in the streams were 2.5 billion years old! He stated that this study throughout the mountains and valleys of Montana was possible because of the generosity of the ranchers in this area.