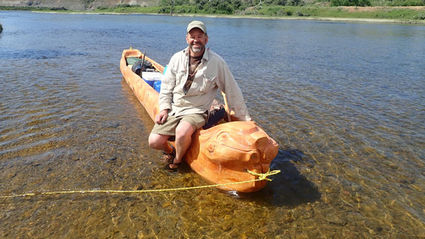 Pictured are Tom Elpel and "Bella".

Tom Elpel of Pony long dreamed of making a dugout canoe, much like those used by Lewis and Clark. The dream came alive this spring with the expert guidance of Churchill Clark, the great-great-great-great grandson of Captain William Clark.

Clark and Elpel carved the canoe at River Camp near Cardwell, the field camp for Elpel's Outdoor Wilderness Living School LLC (OWLS) and Green University LLC primitive skills programs for kids and adults. School groups came from Whitehall, Harrison, Three Forks, Springhill, and Bozeman to learn about the project and to engage in hands-on wilderness skills.

Elpel intended to use a cottonwood for the dugout canoe, but Clark rejected the proposed tree as not quite big enough. "By the time you remove the bark and the sapwood, you lose a foot of the diameter off the tree," Clark said.

In a crunch to find a replacement, Elpel bought a fat, twenty-foot-long Douglas fir log from Marks Lumber in Clancy, generously delivered to camp by Elpel's neighbor. "The tree was full of big knots and cracks, and the folks at the lumberyard were skeptical about using it for a dugout canoe," Elpel said.

They were right to be concerned. The wood was too hard and the grain too twisted around the knots to do the job solely with traditional hand tools, so Elpel used a chainsaw to block out the inside and a Log Wizard attachment to plane it down layer by layer. Clark worked with an adz and drawknife to remove the sapwood and sculpt the bow and stern lines. They sealed exposed knots and raw wood regularly with oil to reduce drying and prevent cracking, yet they could hear the wood popping and cracking each day as they worked.

"Small cracks can be sealed with a finish of linseed oil and varnish, and anything that absorbs water will swell and seal itself when wet," Elpel said, "but at times it seemed like there were more cracks than canoe."

The duo resorted to epoxy for larger cracks.

While shaping the bow, Clark saw a beaver face in the wood, with a knot as one eye. "That's what she wanted to become," he said. Clark researched beaver images online and sculpted the bow accordingly so that the final product looks like a beaver swimming through the water.

"I was imaging a simple canoe," Elpel said, "but Churchill produced a work of art. She is such a beautiful canoe that I named her 'Belladonna Beaver,' or 'Bella' for short." Cracks in the wood swirl around the knots looking much like ripples in the water, he added. The stern is shaped like a flat beaver tail, used as a handle to lift the canoe from the back.

The canoe isn't entirely finished, but done enough that Elpel and Churchill and friends paddled the Marias River from Tiber Dam eighty miles downstream to Loma, where the Marias converges with the Missouri.

"I wasn't sure there was enough water in the river to float the boat," Elpel said. "We backed the trailer into the river, and the water didn't even reach the middle of the wheel. The canoe is heavy enough that I was afraid it might just sit on the bottom."

Nevertheless, the men loaded their gear in the canoe and shoved it off the trailer. "She floated beautifully," Elpel said, "It was truly amazing." The difference between paddling a dugout versus a modern canoe is analogous to the difference between driving a pickup truck versus a car, he noted. The wooden canoe is bigger with greater cargo capacity, yet not quite as zippy as a plastic canoe.

"Bella is the most stable canoe I've ever paddled," Elpel said, "I think it would be difficult to flip her over, although we didn't push our luck and test her limits." Elpel produced a video about paddling the Marias, published on YouTube as the "Marias River Adventure: Paddling Montana in a Dugout Canoe." 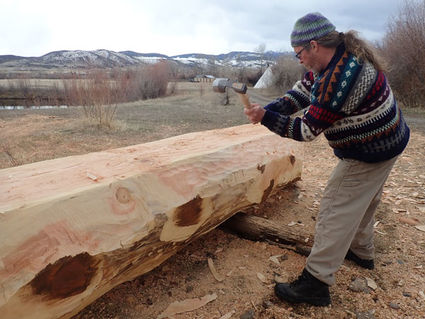 Arriving at Loma, they found a boat ramp that consisted of a slippery wet clay dropping off sharply into the water. "Getting Bella out of the river would have been a challenge," Clark said, "but six young Hutterite men happened to be standing there when we arrived. We pushed and they pulled, and we slid her up the bank high enough to back the trailer under her bow."

They haven't yet weighed the canoe, but estimated it could be about 500 pounds. "That might be wishful thinking," Elpel acknowledged.

Clark plans to return later this fall to finish detail work on the canoe. The sidewalls need to be thinned a little more, and he wants to trim the gunnels to make a better handgrip along the edge.