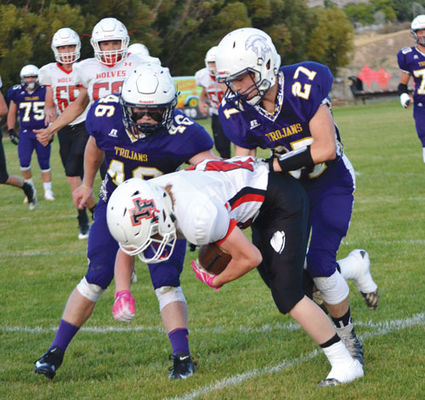 To say last Friday's Whitehall/Harrison High School football teams win over Three Forks was exciting would be an understatement.

Trailing 22-14 late in the fourth quarter, the Trojans were able to cut the lead to two on a five-yard Connor Johnson to Cade Briggs touchdown with 58 seconds left in the game. Johnson would then connect with freshman Brendan Wagner on a the two-point conversion to tie the game that would eventually end up in overtime. The dramatics would continue with Whitehall scoring two more touchdowns on their way to a 34-28 double overtime victory.

After the game, a jubilant head coach Dan Lacey praised his teams fight throughout the evening.

"They did exactly what we asked them do --- play four quarters of football and never give up on each other," he said. "A double overtime win at a homecoming game, you can't ask for anything more."

It was a tough start to the game for Whitehall (2-3, 1-1 Southern B), who trailed 6-0 after a Colton Miller touchdown with 5:51 left in the first quarter. It would be the only score of the first half in a hard fought defensive battle.

There would be bad news for the Trojans prior to halftime when leading tackler and rusher Sawyer Keener would go down with a leg injury.

Whitehall would receive the kickoff to start the second half and proceed to march down the field before their drive stalled near the red zone. Faced with a fourth and three at the Wolves 30 yard line, Johnson would connect with Briggs for 15-yard completion. Johnson would find sophomore Tegan Robbins on the next play for a 15-yard touchdown. A successful point after the touchdown would give the Trojans a 7-6 lead with 9:49 left in the third.

Three Forks would answer back later in the quarter several plays after blocking a Trojans punt on a four-yard Miller touchdown run. A successful two-point conversion would put Three Forks up 14-7 with 4:26 left in the third.

Much as they had all evening, Briggs and Johnson would connect again, this time on a 15-yard pass to tie the game at 14 with a little on ten minutes remaining.

The Wolves would once again find the end zone in fourth quarter when Miller would connect with Maciaiah Hauser on a 16-yard play. A successful two-point conversion would put Three Forks up 22-14 with 4:38 left in the game.

Whitehall would answer back in dramatic fashion.

Faced with a fourth and 13 at the Wolves 42, Johnson would connect with Briggs who made an unbelievable catch for a first down at the 18-yard line.

The two would connect moments later to cut the lead to two-points with under a minute left in regulation.

Lacey said the Johnson and Briggs love the bright lights and the big stage, adding Johnson fought through some turnovers and the duo helped the team battle back.

Johnson would then connect with Wagner to tie the game. Lacey said Wagner stepped up for the team and got the job done. He said the team was once again faced with adversity losing Keener, but they had some younger guys step up.

"When you have guys that go down and other guys step up and make plays – that speaks volumes of what these older guys are teaching our younger guys," Lacey said.

It was a tough start to overtime for the Trojans. Starting on offense, Three Forks would lose 13 yards on their first two plays before Miller once again connected with Hauser, this time on a 23-yard touchdown. They were unsuccessful on the two-point conversion and took a 28-22 lead.

Johnson would run for nine yards on the first play for Whitehall, and would score on a one-yard run on the second play. A Reynolds extra point fell just short and the game would move to a second overtime.

The Trojans would quickly take a lead they would never surrender when Johnson found Briggs for a four-yard touchdown. An unsuccessful two-point conversion would put the Whitehall up 34-28.

Robbins stepped up huge on the first Three Forks offensive play of the second overtime when he intercepted Miller to seal the huge win.

Lacey said Robbins is going to be a player that will soon be known all across the Southern B Conference.

"He is just a heck of a competitor. One thing you love is when a guy wants to go out and compete and loves the game. He absolutely loves the game of football. Guys like that don't come around all the time, but football is his life and you saw that tonight," Lacey said.

The Trojans will next play Friday, October 28 when they host Broadwater County (3-2, 2-2 Southern).

Lacey said one big thing the Trojans will have to watch for is the speed of the Bulldogs and keep an eye out for receiver Kameron Rauser and quarterback Tyson Racht.