A few weeks ago, members of the Whitehall Chamber of Commerce discussed the idea of hosting a Halloween festival. This is not only a great idea, it is something that is very needed for the community.

Halloween has changed quite a bit over the past several decades. It used to be that trick or treating was the culmination of events and streets would be lined for several hours with kids eager to fill their bag full of enough sugar to make their parents crazy until Thanksgiving. Things are different now. While there are kids who will still trick or treat and many areas see decent numbers, there are homes that do not get any. Instead, kids take part in festivals, or downtown trick or treat events. These are both something that would be great for Whitehall. 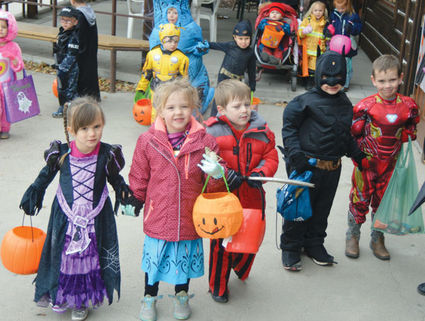 Trick or treaters make their rounds on Legion Avenue. Unfortunately, this was the only group to visit the Ledger office all day.

The early discussion of the proposed festival indicated it would take part over the course of several weekends. This would not only be great for local kids, but it could also be a boon to the area with people coming to Whitehall as a Halloween destination. The event could be catered to attract both parents and children and turn into an asset to the community.

Some sort of downtown event could also be beneficial on Halloween. Having something directly after school on Legion Avenue with events in the park as well as businesses handing out candy would be great for the kids. This year a group of preschool students stopped by the Ledger office, but that was it. It would be nice to have something special for the kids to do in a safe environment. It would also be beneficial for the kids who live out of town and may not have the best access to trick or treating later that evening.

The early discussion on a Halloween festival was positive news, let's hope something can come to fruition in 2019.