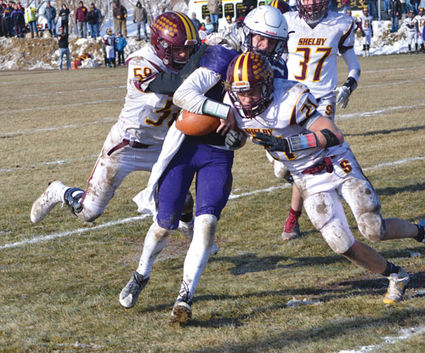 Max Feight fights for extra yardage in the 2017 Class B Playoffs.

The national finalists will be announced on November 8.

The award was created by Wendy's founder Dave Thomas in 1994 as a way to celebrate the outstanding achievements of youth in America. Wendy's High School Heisman is a joint program between Wendy's and the Heisman Trophy Trust, host and custodians of the Heisman Memorial Trophy.

To be eligible for the award, student-athletes must maintain a GPA of 3.0 or higher and be proven leaders and roles models within their school and community. Applicants must also perform in at least one of the 47 school-sponsored events recognized by the International Olympic Committee in the Summer and Winter Olympic Games or the National Federation of State High School Associations.

Prior to the announcement of the state winner, Feight said it is a pretty great honor to be recognized as a finalist by one of the most prestigious scholarship organizations for student-athletes, and a testament to all the hard work at school, practice, staying late to watch film and with homework.

Feight added the importance of his recognition to the younger kids in Whitehall. He said he can show them you can be successful in both athletics and the classroom.

Feight has excelled in three sports during his career at Whitehall High School. In basketball, Feight averaged 14 points as a freshman, 18 as a sophomore, and 27 as a junior. During his junior season, he was selected all-state in football. Playing at quarterback, he led his team to an undefeated regular season and the second round of the MHSA Class B Playoffs. He finished the season with 2,866 passing yards and 32 touchdowns. He also ran for 614 yards and seven touchdowns. He has also excelled as a member of the Trojans track team, including during his junior year when he finished in both hurdles' events at state.

Feight, who suffered a serious knee injury during the first football game of his senior season in late August, has since had surgery and has plans to play either football or basketball in college.

Whitehall High School football coach and athletic director Dan Lacey said he is extremely proud of Feight for his commitment and dedication. 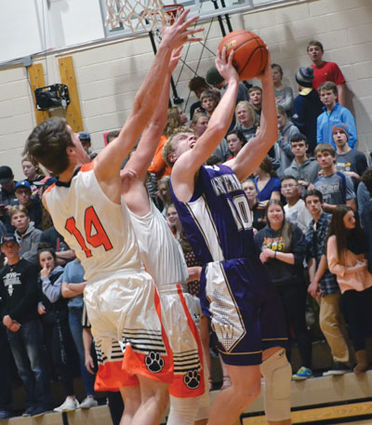 "His hard work hasn't gone unrecognized in the school, community, state and now the national level. The greatest quality about Max is that he is committed and strives for greatness in everything he does. He's always competing, whether it's in sports or academics, he wants to be at the top," Lacey said. "He is a great role model for our youth in the community and he always has a smile on his face no matter what situation or challenge he is faced with. He is what Trojan Pride is all about."