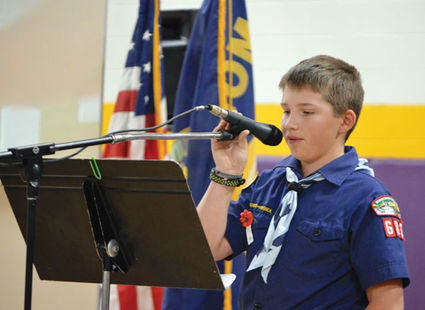 Miles McLean speaks at the program.

The Whitehall School District honored those who have served last week at the annual Veteran's Day Program.

The program included a 100th year celebration of Armistice Day in 1918 by Whitehall fifth graders. The event also included performances by the combined choirs, a Roll Call, "Marches of the Armed Forces", and a performance of "God Bless America".

The program started with a presentation of colors from the cheer squad and a performance of the national anthem by the middle school and high school band. Marta Nelson and Adam Williams also performed "Taps".

In his closing speech, Whiteha...