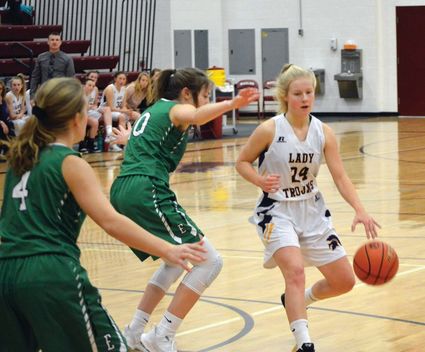 Jada Clark has had a strong start to the season for the Whitehall High School girls basketball team. Ledger photo by Jack H. Smith

In both of their games at last week's Manhattan Tip-Off Tournament the Whitehall High School girls basketball team trailed going into the fourth quarter. The Lady Trojans saved their best for last in both games with two dominant final quarters to come away with a 40-31 win over Deer Lodge and a 35-29 win over Ennis.

Whitehall trailed 23-20 in Friday's game against the Lady Wardens and outscored the Lady Wardens 20-8 in the final frame. On Saturday, the Lady Trojans erased a 25-20 deficit on their way to their third consecutive victory to open the season.

"This group of girls, they are definitely not a bunch of quitters. I love how they will get after it whether their shots are falling or not," head coach Kelly Nieskens said.

Trailing by five on Saturday, Whitehall cut the lead to one early in the quarter after two three pointers by freshman standout Brynna Wolfe. She would tie the game on a free throw on the next Whitehall possession, and Whitehall would take their first lead since the second quarter when Asha Noyes grabbed an offensive rebound and scored midway through the quarter. Noyes was fouled on the shot and connected her free throw to give Whitehall at 30-28 lead. Ennis would cut the lead to one on their next possession. Noyes would once again put together a masterful sequence of events when she stole the ball from a Lady Mustang and took it the length of the court for a lay up to push the lead to 32-29.

"We finally got some shots to fall in the fourth. Defensively we played the same for four quarters, but finally got our offense rolling. I'm so proud of these girls. They keep battling and battling," Nieskens said.

Wolfe led the team with a game high 15. Asha Noyes was also in double figures with 10 and eighth grader Jada Clarkson added seven. 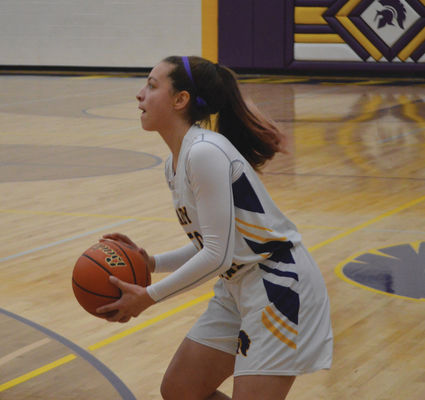 Jada Clarkson has had a strong start to the season for the Whitehall High School girls basketball team.

The Lady Trojans will get their sternest test of the season Friday night at home when they host defending state champion Three Forks. The Lady Wolves will come into the game at 1-1 after splitting a pair of games last week.

Three Forks returns one starter last year's team, Kyle Olson who was all-state and averaged 18 points a game last season. Nieskens said you don't hope to stop Olson, but you do want to slow her down and focus on the other players on the team.

Going into the matchup, Nieskens said his team is at their best when they are getting the ball quickly up and down the court, but some teams they play will try and slow them down and pack the paint.

"We're going to have to learn to play both ways. Some teams will go up and down with us, but others will sit in the paint and take away our drives," he said.

In other action this week, the Lady Trojans will travel to play at Boulder.