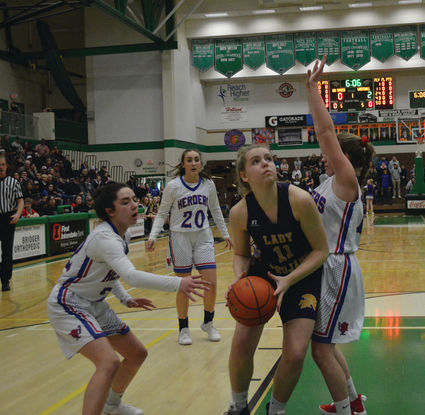 Kendra Klapan looks for the shot at the 5B District Basketball Tournament. Ledger photo by Melissa Jenkins

After picking up 15 wins and finishing the regular season second in the 5B District, Whitehall High School girls basketball Kelly Nieskens is proud of what his team accomplished during the season.

"This was a hardworking group, they did everything I demanded and more. I asked a lot of each of these girls and they gave me their best. I am extremely proud of them. They should feel proud too after the hard work they just put in," Nieskens said.

In his second year as coach, Nieskens feels the team had some great success stories during the 2018-19 season.

"What Maxine Hoagland and Jada Clarkson did for us as 8th graders was amazing. I am so proud of those two, I can't wait to work with them more and watch them grow. Another success was Brynna Wolfe as a freshman. To come and play at the level she did, everything ran through her. She did a great job facilitating our offense, her basketball IQ is very high, especially for her age. Another good one we'll push to get better. Meagan Johnson pushed herself and continuously got better. I couldn't be happier for her, she'll just continue to improve. I can name all of them and how they worked hard and improved," he said.

Whitehall was able to pick up seven wins in conference play including a sweep over defending state champion and 2019 District Tournament champion Three Forks. The team fell one win short of qualifying for this week's Divisional Tournament after a loss to Townsend in the consolation championship.

Nieskens believes everyone in the program had a hand in helping the team be successful.

"It's not always about who gets the most court time. We value everyone on the team who shows up with a good attitude and wants to work hard and get better. In the end, though we didn't reach our final goal," he said.

Nieskens won't make excuses for the team but did say they had to deal with injuries all season.

"Losing Asha Noyes right before tournament was difficult for us. She played a big role for this team. She not only lead us in scoring and rebounds but most of all her leadership was missed. She really is the glue that holds us together and means a tremendous amount to this team. But in the end, it allowed others to step up and build more confidence," he said.

With no seniors on the team, the year was also a big learning experience for the Lady Trojans.

"We finally got the chance to compete with good teams and have some success. It offered a great learning opportunity for these young girls and they loved it. I really think the biggest growth for these girls is yet to come. This is a competitive group, they will push each other to get better. The girls need to keep playing together this offseason. The only way they will get better is if they put in the time and stick together," Nieskens said.