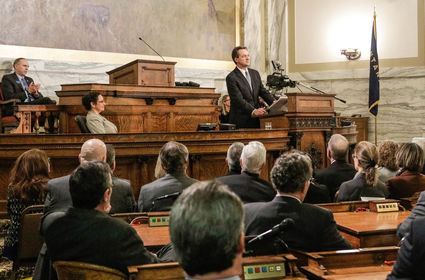 Gov. Steve Bullock has been asking for funding for infrastructure each session he's been in office. Bonding, or borrowing for public works project, was approved by the Legislature last week for the first time in five sessions. Bullock spoke about this goal at his State of the State address given Jan. 31, 2019. Photo by Shaylee Ragar/ UM Legislative News Service

On a cold, January afternoon last year, Wendy Gerky got a call that someone could see water rising in her downtown Havre quilt shop. She thought it was joke.

By the time Gerky got to her store, Bearly Square Quilting, the water was knee deep.

The flooding came from a fire suppression pipe that ran underneath the building. After the break was found, the city had to shut off water to the block until it could be repaired. The quilt shop had to move to a temporary location.