“We are now several hundred miles within the bosom of this wild and mountanous country, where game may rationally be expected shortly to become scarce and subsistence precarious without any information with rispect to the country not knowing how far these mountains continue, or wher to direct our course to pass them to advantage or intersept a navigable branch of the Columbia, or even were we on such an one the probability is that we should not find any timber within these mountains large enough for canoes if we judge from the portion of them through which we have passed.”

The dream of carving a dugout canoe and paddling it down the river has long tickled my imagination. Last year I had the opportunity to carve that canoe and the privilege of working side-by-side with Churchill Clark, the great-great-great-great grandson of Captain William Clark of the Lewis and Clark Expedition.

This year, my friends and I launch the dugout as part of a small fleet of canoes embarking on a six-month “Missouri River Corps of Rediscovery” to explore the 2,341-mile river from its beginning near Three Forks, Montana to it’s end, where the Missouri spills into the Mississippi at St. Louis.

Paddling the river in a dugout canoe is the realization of several persistent dreams that serendipitously came together for the journey. With my youngest out of the nest, I chose 2019 as the year I would embark on an adventure to either walk the Appalachian Trail, bicycle across the United States, or paddle the Missouri. This latter dream won out when the dugout canoe project came to fruition.

As president of the Jefferson River Chapter of the Lewis and Clark Trail Heritage Foundation, and as a wilderness survival instructor with an emphasis on primitive skills and bushcraft, I had long dreamed of carving a dugout canoe, yet lacked a suitable tree for the project.

The dream resurfaced after connecting with Churchill Clark. He retraced the Lewis and Clark journey to the Pacific Ocean and back in a dugout canoe during the bicentennial, from 2004 to 2006, and now travels the country “carving dugout canoes and paddling trees.”

I found what seemed like a large enough tree, so Churchill came to Montana to oversee the project. However, as Churchill pointed out, there isn’t much left after removing the bark and the softer sapwood to expose the solid wood that makes a nice canoe. Anything less than 36 inches in diameter is too small for a good canoe, and my tree was just too small.

In a pinch and panic, we called around in search of a big enough tree. I ultimately bought a massive old Douglas fir from a sawmill.

Douglas fir is not a traditional canoe wood, being hard and full of knots, and because it cracks and pops like popcorn as it dries, but we believed it would work. The knots necessitated extensive use of power tools to aid the traditional adze work.

It took nearly three months of sawing, chopping, grinding, and sanding--plus a good bit of epoxy, linseed oil, and varnish--to turn the 10,000-pound log into a 500-pound canoe.

Early in the process, Churchill observed the image of a beaver face in the bow of the canoe and sculpted it into the design. I had merely envisioned a functional canoe, but he created a work of art, which is so beautiful that I ultimately named her Belladonna Beaver.

I was admittedly skeptical ahead of our first test of the canoe. We drove 260 miles to spend a week paddling the Marias River in north-central Montana, and it didn’t seem like there was enough water to float the boat.

As Churchill noted, a cottonwood loses half its weight as it dries, while a Douglas fir loses only ten percent. It is a very heavy canoe. Nevertheless, Belladonna Beaver floated beautifully and paddled like a dream. We enjoyed a week exploring the Marias River as a good test run to prepare for the Missouri Expedition.

My goal in leading this Missouri River Corps of Rediscovery isn’t merely to race to the end, but rather to paddle the river as a conduit for exploring the land and meeting its inhabitants. We will be botanizing, foraging, fishing, and hunting as we explore the geographical landscape and meet the indigenous and newly integrated flora, fauna, and human habitations. 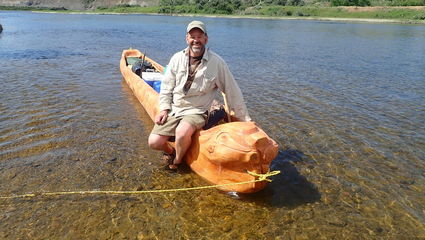 It is also my goal to raise a minimum of $38,722 towards the purchase of a new public campsite on the Jefferson River Canoe Trail segment of the Lewis and Clark National Historic Trail. That amount was the sum total cost of the original Corps of Discovery, according to Lewis’s post-expedition accounting. The fundraiser will help us secure matching grants for land acquisition, enhancing the river trail experience for generations to come.

We invite the public to join us for the journey through this weekly column or to find us along the way to paddle a stretch of the river together.

Thomas J. Elpel is the founder of Green University® LLC in Pony, Montana and the author of seven books. His video “Dugout Canoe Carving: The Story of Belladonna Beaver” has had more than one million views on YouTube. Please go to http://www.Elpel.info to learn more about the expedition and the fundraising effort for the Jefferson River Canoe Trail.