From Alaska to Argentina: Ferrero makes a stop in Whitehall 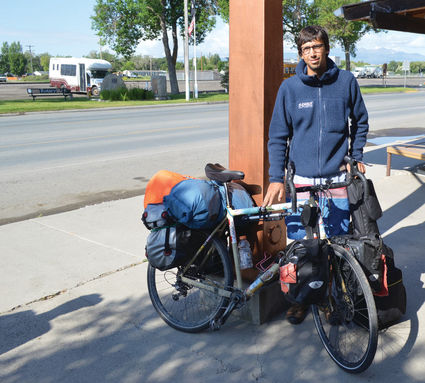 Kevin Ferrero of France recently made a stop in Whitehall as part of his bike journey from Alaska to Argentina. Ledger photo by Jack H. Smith

When Kevin Ferrero was an eight-year-old in France he was inspired by his older brother's four-year bike journey from Alaska to Argentina. Now in his 20's, Ferrero is now making the trip on his own and recently stopped in Montana as part of his journey to Ushuaia, the southernmost city in the world.

Ferrero started what will be around an 18,000-mile trip in June of 2017 and has traveled back home to France when the weather has been too bad to ride. He made his way to Montana over two weeks ago and while in Whitehall was staying with Steve and Judy Schwab.

Steve said his friend in Missoula...