In the week leading up to Whitehall/Harrison High School's home opener last Friday against Shepherd, head coach Dan Lacey talked to his team about playing with effort energy. The message was well received with the Trojans who shined in all areas of the game and improved to 2-0 with a 19-8 victory over the Mustangs in a game that was delayed nearly 40 minutes due to lightning.

"I could not be any prouder of the way they played in all three phases of the game. We had a lull last week in special teams and I thought our punt coverage tonight (Sept. 6) was the best I've seen since I've been here. I'm super proud of them. They worked their tails off and you can't ask for anymore," Lacey said.

Whitehall (2-0) would score the first 19 points of the game and first found the scoreboard on a Tegan Robbins touchdown run just moments after a Dylan Smith interception. Following a Robbins interception, the Trojans would find the end zone again, this time when freshman quarterback Miles Hoerauf connected with Flint Smith for a touchdown. Evan Wagner would score the final Whitehall points of the game on a touchdown pass from Hoerauf in the second quarter. Shepherd would cut the lead to 19-8 with 5:28 left in the opening half. Senior Mike Wilkinson would stop a Mustang drive late in the half with an interception.

The Trojans were unable to capitalize on a long kickoff return by Brendan Wagner to start the third quarter but held the Mustangs scoreless in the final two quarters with interceptions from Wagner and Payton King, as well as a goal line stand midway through the fourth quarter.

Lacey said on offense the team took care of the ball and on defense they created turnovers and got a big stop in the red zone that sealed the game.

The Shepherd touchdown in the second quarter is the only score the defense has given up in eight quarters and Lacey discussed the importance of pre-snap preparation. 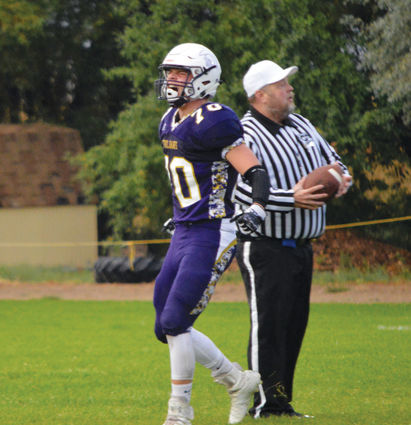 "They are really buying into and understanding where the threats are every single time the play comes, and it shows. We are the ones initiating the contact rather than getting blows delivered on us. That has helped us a lot on defense," he said.

"It's amazing. These kids work so hard and they buy into it when we talk about it being "we", not "me".

Whitehall will return to the road Friday with a matchup against perennial power Missoula-Loyola (1-1). The Rams lost their first game of the season last Friday against Fairfield in a rematch of last year's state title game. Missoula-Loyola opened the season with a convincing victory over Huntley Project.