The Whitehall High School girls basketball team used a balanced offensive attack in their season opener December 7 to pick up a 61-44 win over host Manhattan Christian.

The Trojans had four players in double figures with sophomore Brynna Wolfe leading the way with 16 points. Freshman Jada Clarkson and junior Meagan Johnson each had 14, and junior Kendra Klapan finished with 11 points.

Head Coach Kelly Nieskens said one of the goals this season is put five girls on the floor who the defense has to respect at all times, and against Christian, they were able to get the ball up the floor quickly which allowed them to spread the ball around.

"We wanted to play fast, score quick and get after it defensively. Having four girls score in double figures I believe we were able to do that. We have girls playing and accepting different roles and positions this year that we worked hard on in the offseason to improve our team," he said.

After taking a 15-13 lead at the end of the first quarter, Whitehall would break open the game in the second and take a 35-20 lead into halftime. 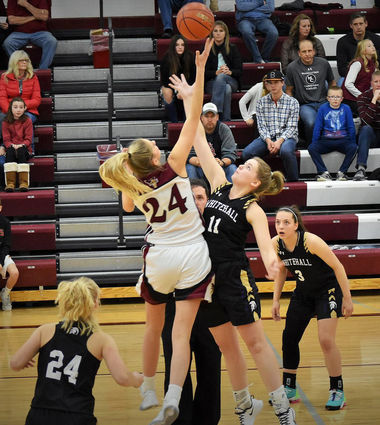 "We had a slow start but were able to fight back and take control of the game. Once we were able to do that, we were able to play our style of basketball the rest of the game. Brynna, Meagan, and Jada are solid guards who will all have a good year this year," Nieskens said. "This biggest improvement since last year has been Kendra Klapan. She got into a little foul trouble early but played great on both ends of the floor. Manhattan Christian has a 6'3" post who is a really good player. We really needed that kind of performance from Kendra, especially since we will be without Asha Noyes and Maxine Hoagland until after the first of the year."

The Trojans will compete this week at the Tip-Off Tournament in Manhattan. They are scheduled to play Great Falls Central Friday at 3:15 at Manhattan High School, and Deer Lodge Saturday at 1:30 p.m. at Manhattan Christian High School.

"We've had some really good practices from all the girls leading up to our first game. That first game usually consists of more than usual unforced turnovers and missing high percentage shots. With Great Falls Central coming up defensively, I expect us to make opponents uncomfortable every game. The offensive side of the ball will improve with more practices and games," he said.