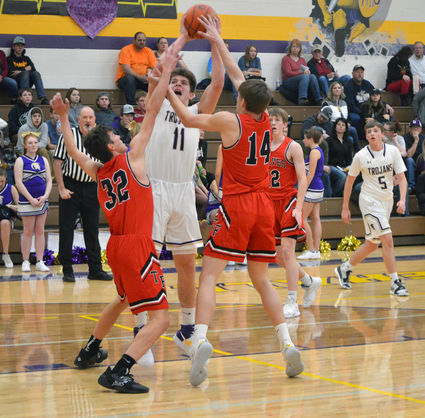 Whitehall junior Dylan Smith goes up for the shot against Three Forks. The Trojans have road games this week at Manhattan and Twin Bridges. Ledger photo by Jack H. Smith

The Whitehall High School girls basketball team will look to bounce back from their first loss of the season with road games this week at Manhattan and Twin Bridges.

"Once you get behind on a good team like that you need everything to fall your way and we just weren't able to close that gap," he said.

The Trojans were led in scoring by Jada Clarkson with 22, and Brynna Wolfe was also in double figures with 16. Maxine Hoagland had four, and Asha Noyes and Britney Welker both finished with two points.

Nieskens said it was great to have Noyes and Hoagland back on the court after both have missed time due to injury.

"This will really allow us to be able to rotate more girls in so we can focus more on the defensive end. They are both good athletes who will help us rebound better so we can push the ball up the floor," Nieskens said.

Nieskens said the focus for Twin Bridges and Manhattan this week will be to cut down on our turnovers and be ready for the Manhattan press.

When the Whitehall High School boys basketball team takes to the court Thursday in Manhattan, longtime Head Coach Zach McLean is looking to see his squad play with a great deal of effort.

McLean said the Tigers are a talented team with a lot of guards that like to shoot the three.

"But no matter what you prepare for, you have to bring the effort, plain and simple," he said.

In their first game back from the Christmas break, the Trojans fell 57-35 last Saturday at Big Timber. 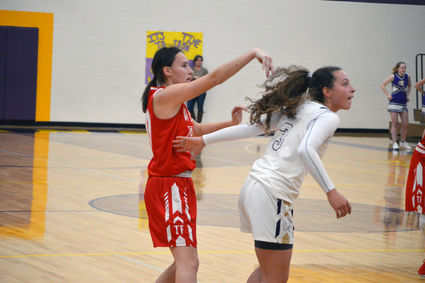 Whitehall's Jada Clarkson (3) had 22 points in last week's game at Big Timber. The team will next be in action Thursday at Manhattan. Ledger photo by Jack H. Smith

After starting with several turnovers that led to easy baskets for the Herders, McLean said the team was able to generate some stops and ran a few sets to get them some shots and we were able to tie up the game in the second quarter.

McLean said much like it has been the case this season, turnovers and defending the ball have been killers for the team.

"There was no resistance for them, they got whatever they wanted. We also didn't shoot the ball well which hurts and shot under 50 percent from the free-throw line," he said. "Big Timber played harder than us, they dove for loose balls, they had more effort than us."

With the game Thursday in Manhattan and a matchup against a talented Twin Bridges team Friday, McLean said the Trojans need to be able to defend better one-on-one.

"We have to have more energy and we have to take care of the ball. We want a game with lower possessions," he said.