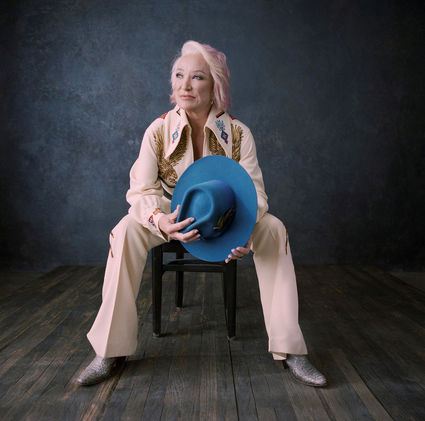 County music star Tanya Tucker has been announced as part of the lineup for the 2020 Headwaters County Jam near Three Forks. Tucker won two Grammy's at the 62nd Annual Awards in Los Angeles Sunday. She won for Best Country Song and Best Country Album. She also was nominated for Song of the Year and Best Country Solo Performance. Danny Clinch photo

To make her new album, "While I'm Livin'," it could be said Tanya Tucker went on the musical equivalent of a blind date.

When Tucker arrived at in Los Angeles to get into the studio, she had not discussed the type of album she was going to make with Shooter Jennings, the co-producer for the project.

Before arriving for the recording session, Tucker had also not met Brandi Carlile, heard her music and knew very little about Carlile, who teamed up with her long-time musical partners, Phil and Tim Hanseroth, to write most of the songs for "While I'm Livin'."

"Finding out that the twins and Brandi wrote all of these songs, most all of them, custom fit to me, I mean, how do you do that?" Tucker remarked in a recent phone interview. "How do you write songs for a person you've never met and you don't really know and custom fit (them)?"

"I totally believe that's a real talent right there," she said. "I don't know how they did it, but they did do it for me. I just adore them for that. We've become very close friends, and I just adore all three of them."

But like a blind date that starts on a sour note, Tucker's initial impression of the songs being presented by Carlile was not exactly love at first sight.

"I wasn't sure about the songs, really. I don't know if it was the space I was in, right after Christmas, I don't know if I was in a melancholy mood or what. But I was listening to the songs and I just thought 'No, I just don't hear anything.'"

In fact, just a few days before she was due at the studio, Tucker tried to call off the session, only to be talked into giving the project a try by Jennings, who had casually brought up the idea of producing an album to Tucker (she's known Shooter since he was a baby through her friendship with his late father, Waylon Jennings) and then got Carlile involved as co-producer and songwriter.

Once Tucker arrived in Los Angeles and got into the flow of recording, doing full vocal takes of the songs with no overdubs or fixes, she warmed to the task at hand. She now has effusive praise for Carlile and the leadership and guidance she brought to the recording session. And lots of people are happy this partnership happened, including Grammy voters, who have nominated Tucker and "While I'm Livin'" in four categories.

As for Carlile, she jumped at the chance to be part of the "While I'm Livin'" project. Wasting little time, she and Hanseroth twins started researching Tucker's life and music, building bits and pieces from her life and times into the lyrics to bring an autobiographical dimension to the songs, which have an earthy acoustic-centric feel that straddles the lines between country, folk and rock.

Carlile had been a long-time fan of Tucker, who burst onto the country scene in 1972 – at age 13, no less -- when her song, "Delta Dawn," became a country hit. A couple of years later, Tucker landed on the cover of "Rolling Stone" magazine, with a headline that read "Hi, I'm Tanya Tucker, I'm 15. You're gonna hear from me."

And Tucker made good on that promise – and then some. During the 1970s, she reeled off a string of hit singles that includes "What's Your Mama's Name," "Blood Red and Goin' Down" and "Would You Lay with Me (In a Field of Stone)," returned to the charts in a big way in the mid-to-late 1980s with hits like "Down to My Last Teardrop," "(Without You) What Do I Do With Me" and "Two Sparrows in a Hurricane" and had one last brush with chart success in 1994 with the top 5 hit "Hangin' In."

She also became known for a number of romantic relationships with high-profile stars, including Merle Haggard, Don Johnson, Andy Gibb and most famously, Glen Campbell. Musically, she is credited with being one of the few women associated with the late 1970s outlaw country movement for her accessible rock-tinged country sound, while her tough and sexy persona made her stand out in the conservative world of country music.

Carlile has been a vocal champion for Tucker, joining the singer at several recent major appearances and touting Tucker's musical influence on numerous country and Americana artists (Gretchen Wilson, Miranda Lambert and Maren Morris) in interviews. Tucker is grateful for the support.

And the positive reviews and notoriety Tucker is receiving for "While I'm Livin'" – as well as her association with Jennings and Carlile (who's enjoying breakout success after winning three Grammy Awards in 2019 – has put a charge into Tucker's career.

"I was just with Brandi yesterday doing my new video for 'Bring My Flowers Now' and she flew in and flew all night to get there," Tucker said. "I really appreciate everything that she's done because she is really blowing up right now and here she is (helping) with my career. She's pretty amazing. I don't know when she sleeps."

Tucker, who had gone 17 years since her last album of original material, is just getting started with playing shows in support of the new album. She's been doing a set list that opens with "Would You Lay With Me (In a Field of Stone)," moves into some of her early hits and later material and a few songs from "While I'm Livin'" before finishing up with "Delta Dawn." Tucker wasn't the one who came up with this sequence of songs.

"The first show we did for the record, for this album, was at the Exit In in Nashville, which is kind of like the Troubadour of Nashville," Tucker said. "I just didn't know what (songs) to do, so I asked my friend, Frank Liddell, who's a great producer and a friend of mine, and I said 'Man, what do you think I should do?' He actually did the set list for me.

"I was thankful that Frank had a vision for that because that's not really one of my fortes there, doing a set list," she said. "I really don't know what people expect from me. I know they want to hear my hits and all that, but there is an art form to having the right set list and having the flow of the whole thing go right. It kind of builds up to a crescendo there."

Tucker said the Exit In show went over very well, and when she did the same set list for a mid-September date at New York City's Bowery Ballroom, the response was so emphatic that she did a rare encore, performing "The House That Built Me," the Miranda Lambert hit that Tucker recorded in her own style for the "While I'm Livin'" album.

She hopes to include more new songs as touring continues and that audiences will like hearing these songs.