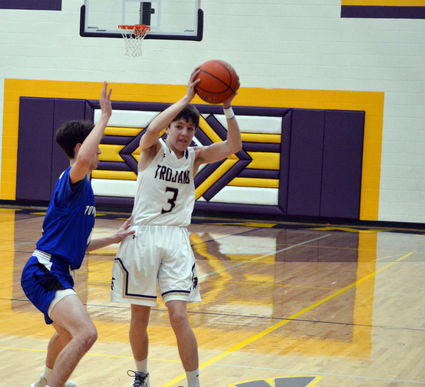 While it may not have resulted in a win last week, the Whitehall High School boys basketball team showed they are close to a breakthrough game. The Trojans lost two close games last week the first a 47-40 setback Thursday at Anaconda and a heart-breaking 50-47 overtime loss Friday at rival Boulder.

Tied at 16 at the half, Whitehall (1-11, 0-6 5B) would come out of the break strong Friday outscoring the Panthers 14-6 to take a 30-22 lead into the final quarter. Jefferson would answer with a furious late minute comeback to send the game to overtime where they outscored the Trojans 10-7.

Head Coach Zach McLean said his team is improving, they just haven't got over the hump yet.

"We have played in some tight games this year, just haven't finished the way we would like. In Boulder, we just didn't make free throws. They fouled us intentionally and we didn't make the free throws,' he said.

Whitehall was led in scoring by sophomore Brendan Wagner with a game-high 24 points. Hayden Hoagland was also in double figures with 12, Dylan Smith and Flint Smith had four, and Mason Alexander finished with three points. McLean said he thought they had some really long good possessions against Boulder, the best they have had all year.

The Trojans have now held three consecutive opponents to 50 points or less and McLean said that is exactly what they want.

"We have been playing better defensively and rebounding the ball better. We have also played better offensively in the half-court, being more patient and looking for a great shot versus an average shot," he said.

Whitehall will return home Friday for a matchup against Big Timber and will be on the road Saturday at Three Forks.

McLean said offensively, he wants to see the team have less unforced turnovers and to keep being patient.

"Teams really like to pressure us, they want to try and speed the game up and we have to not get rattled into playing that type of game," he said.