The Whitehall High School girls basketball team moved to 10-2 with two road wins last week. The Lady Trojans (10-2, 5-1) picked up a hard-fought 57-53 win Thursday night at the Snake Pit in Anaconda and followed it up Friday with an impressive 56-41 road win at Jefferson High School in Boulder.

Head Coach Kelly Nieskens said in Anaconda they got to be part of a special night for their community as they honored Gabbie Stetzner, a student who is courageously battling cancer. Nieskens said there was extra motivation for the Lady Copperheads and his squad was able to fight back against their runs and come away with a close win led by an exceptional performance form Meagan Johnson.

"She was our go-to girl when we really needed it," Nieskens said.

Whitehall was strong from the get-go Friday in Boulder and outscored the Panthers in each quarter.

"We turned around and put together a complete game against a conference team on the road. Our focus against Jefferson was to put together four quarters of solid basketball," Nieskens said. 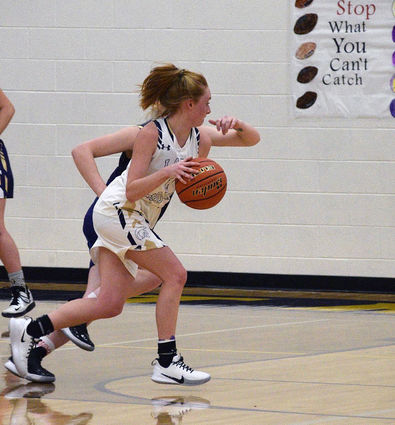 The Lady Trojans were led in scoring by Brynna Wolfe who finished with 27 points. Johnson finished with 10, Jada Clarkson had nine, Ashlynn Ellison added six and Maxine Hoagland finisher her night with four points.

"Brynna's play on Friday was impressive to watch, she had everything working for her and they couldn't stop her. Some of that was set up by Jada Clarkson being able to drive and have the defense collapse on her opening up outside shooting. Brynna took full advantage of any weaknesses in their defense.

Whitehall will return home Friday for a matchup Friday with undefeated Big Timber and will be on the road Saturday at Three Forks.

"Our focus for the second half of the conference is better defining our roles on the team and having five players involved for 32 minutes. We want teams to match our intensity, not the other way around. When we get rolling, we can be a hard team to stop defensively," Nieskens said.