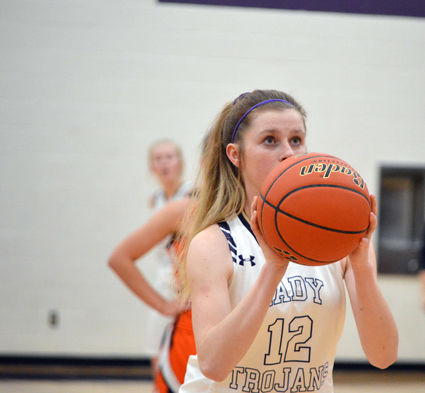 The only thing that could slow down the Whitehall High School girls basketball team last week was Mother Nature.

The Lady Trojans moved to 11-4 on the season with Thursday's 62-48 home win over Manhattan. Their Friday matchup on the road against Gardiner was canceled due to hazardous road areas.

Whitehall started strong in the matchup against the visiting Tigers taking a 7-0 lead and stretching it to 17-4 late in the opening quarter. Manhattan would score the final five points of the quarter to cut the lead to 17-9.

The Lady Tigers stayed hot to start the quarter and eventually cut the lead to 22-21.

Head Coach Kelly Nieskens said what happens a lot of time when the other team is able to get back in the game is when his team plays fast, they score quick and end up on defense a lot more than most teams.

"That is something we have to accept if we are going to play this fast offensively and put shots up. We've got to be able to defend the ball more than most teams," he said.

Whitehall would respond in emphatic fashion when junior Kendra Klapan scored six points in five seconds. Klapan had a putback basket and was fouled, missed the free throw, was able to secure a rebound and get another basket where she was once again fouled. After missing the free throw, Klapan tracked down the loose ball and was fouled where she connected on both free throws to give the Lady Trojans a 28-21 lead.

Nieskens said it was awesome to see Klapan get in the game and have some success.

"We've been trying to have our girls get in the paint more and to be more physical. Both Kendra and Maxine (Hoagland) did that tonight and it was great to see," he said.

Whitehall would finish the half strong and lead 57-38 going into a third-quarter they would dominate and push the lead to as big as 20.

Nieskens said pleased with what he saw most of the night on defense and to be able to use their press more.

"It was nice to have that in and working," he said.

The Lady Trojans were led in scoring by sophomore Brynna Wolfe who had a game-high 24 points.

Nieskens feels it really opens up the Whitehall offense when Wolfe can create and is dialed in on the floor.

"When she is putting up points it makes everyone else play harder and that makes it easier for others to get shots too," he said.

The Lady Trojans (11-4, 6-3 5B) will wrap up the regular season this week with a road contest Friday at Townsend and a senior night game Saturday against Manhattan Christian.