The Whitehall High School boys basketball team will wrap up their regular season with a Friday road game at Townsend and a Saturday home game against Manhattan Christian. According to Head Coach Zach McLean, the two opponents who they have already played this season will be seeing a much different Whitehall team this time around.

Following a 52-50 home loss to Manhattan in their lone game last week, McLean was pleased with the growth of his team.

"I think we are playing good basketball. We have room for improvement, but we are playing a lot better. This is a totally different team from the start of the year to now," he said.

It was a strong start to the game last Thursday for Whitehall who took an early 7-3 lead on a deep three from sophomore Brendan Wagner and were up 13-10 going into the second quarter.

Wagner was electric in the third quarter scoring eight consecutive points for the Trojans helping them increase the lead to 24-19 at the half.

McLean was pleased with the onset of the game for his squad.

"We have actually gotten off to some sluggish starts lately so that was good to see," he said.

Manhattan would rally in the third and take their first lead of the game at 31-30.

A Mason Alexander three would give the Trojans the lead right back and a Wagner layup following a Manhattan basket put Whitehall up 35-33 going into the final quarter.

The Tigers were strong in the fourth where they scored 19 points and took as big as a 52-47 lead.

McLean said his team was a little too zoned in on one Manhattan player in the final quarter and other players started hitting three-pointers.

"We didn't stay in our gaps. We gave up some wide-open threes. We have to be able to finish these games," he said.

Trailing 52-47 late in the game, Whitehall pulled to within two after a deep three from Wagner with 18 seconds left. After forcing a Tiger turnover, Whitehall was unable to connect on a three-pointer from Wagner or a two-point shot from Kenzie Hugulet.

"Getting those two shots was huge. I told them that was tough to be able to do without a time out and they improvised," he said.

Wagner led the team with 16, while Flint Smith and Dylan Smith each had 10. Hayden Hoagland and Hugulet both had four and Alexander finished with three points. 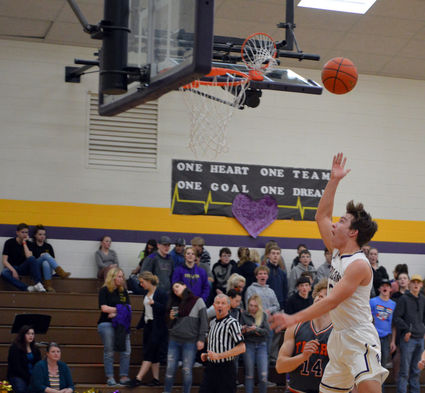 Brendan Wagner puts up the floater against Manhattan. Ledger photo by Melissa Jenkins