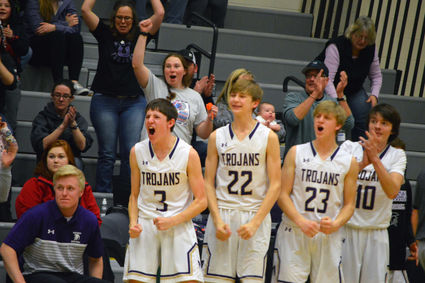 The Whitehall bench celebrates Saturday during their win over rival Jefferson.

The Whitehall High School boys basketball team won two games Saturday to finish third at the 5B District Tournament in Belgrade. The Trojans defeated Townsend 53-49 early Saturday morning and rival Jefferson 54-46 Saturday afternoon and will advance to a play in game March 4 at the Southern B Divisional Tournament in Billings against the third seed from the 4B District in a game scheduled for 6 p.m.

"I'm so proud of these guys. They played hard. They fought hard and it...