Play in semifinals Friday against Manhattan 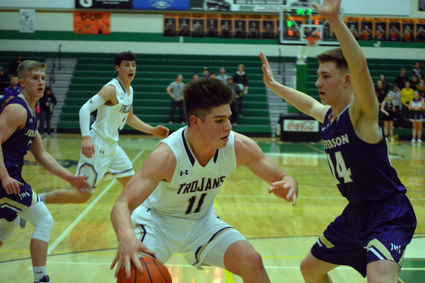 Dylan Smith had a huge night with 14.

After falling in overtimes in both of their regular season games against rival Jefferson, the third time was a charm for the Whitehall High School boys basketball. The sixth-seeded Trojans defeated the Panthers 36-23 Thursday night in the first round of the 5B District Tournament and will now move on to semifinals and a matchup Friday at 4:30 against second-seeded Manhattan.

It was a magical fourth quarter for Whitehall who outscored Jefferson 12-0.

Following the victory, an ecstatic Head Coach Zach McLean praised the fight of his team and said the victory was all about them.