It will be a battle of two VERY familiar teams Friday afternoon in Billings. The Whitehall High School girls basketball team is set to square off with Three Forks in a Southern B Divisional Tournament elimination game scheduled for 1:30 p.m. at the MetraPark Arena. The Lady Trojans fell Thursday night 48-36 to Colstrip and Three Forks lost earlier in the day 36-24 to Roundup. The Lady Trojans won the first game against the Lady Wolves 56-42, but Three Forks won the second game 58-54 in double overtime and won in late February 36-25 at the 5B District Tournament.

Whitehall showed early they were not intimidated from the top seed from 3B and went blow to blow with the Lady Colts in the first quarter. Whitehall would take their first lead of the quarter on a three from Brynna Wolfe at the one-minute mark and led 11-8 at the end of one.

Colstrip flexed its muscle in the second quarter and outscored Whitehall 15-1 to take a 23-12 halftime lead. Wolfe led the Lady Trojans in the first half with five points.

Head Coach Kelly Nieskens said when you are at divisional tournaments everybody is good and you cannot hope something good happens, you have to go out and make it happen.

Whitehall battled back in the third and pulled to within 26-21 on a Jada Clarkson three-pointer at the three-minute mark. The Lady Colts would answer back and had a 31-23 lead going into the final eight minutes. 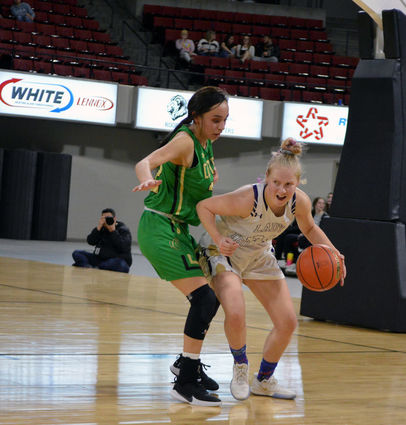 Brynna Wolfe had 14 points against Colstrip.

Wolfe put Whitehall right back in the game early in the fourth with a deep three to cut the lead to 31-26. Her 15 shoot jumper seconds later made it a 31-28 game. After Colstrip would go up eight, the Lady Trojans continued to battle and cut it to 41-36 with 1:08 remaining. Whitehall would get no closer sending them to their fourth game this season against Three Forks.

Nieskens said his team are scrappers and it’s not about how hard they work but they met a big physical team, they didn’t shoot well, and they need a little more from everybody at this level.

Looking towards Three Forks, Nieskens said they are going to go out and pretend they don’t even know them anymore.

“We’re just going to go after and get nasty. Set the tone early and get em down and keep em down,” he said.