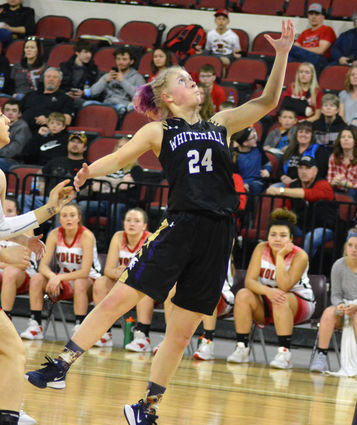 Brynna Wolfe gets off the shot against Three Forks. Ledger photo by Melissa Jenkins

The Whitehall High School girls basketball team did not go down without a fight at last week's Southern B Divisional Tournament in Billings. Although they were eliminated after a loss Saturday 47-40 in the consolation semifinals Saturday morning against Forsyth, the Lady Trojans showed a great deal of heart and promise for the future at the tournament with a 61-51 play-in win Wednesday over Huntley Project and a 43-38 win Friday over conference rival Three Forks. Whitehall fell in the quarterfinals 48-36 against eventual champion Colstrip.

In their first game of the tournament, Whitehall earned a hard-fought ten-point victory over the Red Devils and advanced to the double-elimination tournament.

Following the game, Head Coach Kelly Nieskens said his team kept fighting all night and was able to keep a comfortable lead.

"We knew if we kept taking care of the basketball things were going to go our way," he said. "That's how you win big games."

After falling behind 4-0, the Lady Trojans bounced back led by a strong first quarter from Asha Noyes and took an 11-9 into the second.

Whitehall had a tremendous second quarter and extended the lead to 26-16 going into the half after back-to-back three-pointers from Jada Clarkson and Britney Welker.

The Red Devils would battle back in the third and cut the lead to 32-30 with three minutes left in the quarter. Brynna Wolfe would answer back for the Lady Trojans with back-to-back three-pointers to push the lead to 38-30. A Clarkson bucket were the final points of the quarter and gave Whitehall a 40-30 lead going into the fourth.

Huntley Project would pull to within 54-51 with 32 seconds in the fourth before Wolfe hit four consecutive free throws to up the lead to 58-51. A Clarkson bucket and free throw would push the lead to 10 and seal the victory.

Whitehall was led in scoring by Clarkson with 19, Wolfe had 18, Noyes finished with nine, Britney Welker added seven, and Maxine Hoagland and Meagan Johnson each had four.

"They are really key to us getting our ball movement," Nieskens said.

In their quarterfinal matchup, The Lady Trojans battled to the end against the high-powered Colts.

Whitehall showed early they were not intimidated from the top seed from 3B and went blow to blow with the Lady Colts in the first quarter. Whitehall would take their first lead of the quarter on a three from Wolfe at the one-minute mark and led 11-8 at the end of one.

Colstrip flexed its muscle in the second quarter and outscored Whitehall 15-1 to take a 23-12 halftime lead. Wolfe led the Lady Trojans in the first half with five points.

Nieskens said when you are at divisional tournaments everybody is good and you cannot hope something good happens, you have to go out and make it happen.

Whitehall battled back in the third and pulled to within 26-21 on a Clarkson three-pointer at the three-minute mark. The Lady Colts would answer back and had a 31-23 lead going into the final eight minutes.

Wolfe put Whitehall right back in the game early in the fourth with a deep three to cut the lead to 31-26. Her 15 shoot jumper seconds later made it a 31-28 game. After Colstrip would go up eight, the Lady Trojans continued to battle and cut it to 41-36 with 1:08 remaining. Whitehall would get no closer sending them to their fourth game this season against Three Forks.

Clarkson led Whitehall with 16, and Wolfe had 14. Johnson, Kendra Klapan, and Jacy Johnson each added two.

Nieskens said his team are scrappers and it's not about how hard they work but they met a big physical team, they didn't shoot well, and they need a little more from everybody at this level.

Looking towards Three Forks, Nieskens said they are going to go out and pretend they don't even know them anymore.

"We're just going to go after and get nasty. Set the tone early and get em down and keep em down," he said.

It was a battle of two familiar foes for Friday's elimination game with the Lady Trojans picking up a 43-38 win over Three Forks.

"It feels great. The girls came out and played hard like they always do. We lost to Three Forks the last two times, I'm glad we got this one," Nieskens said following the game.

It was a low scoring affair in the first quarter with both teams only managing two baskets. Whitehall added one more point from the free-throw line to give them a 5-4 lead going into the second.

The Trojans started strong in the second and took a 14-8 lead thanks to six points from Clarkson and a three from Wolfe. Three Forks would answer back with the next four with baskets from both Keaton and Kendall Lynn. Following a Klapan free throw, Kendall Lynn cut the Whitehall lead to 15-14. Wolfe responded for the Trojans with another three to push the lead back to four at 18-14. Whitehall would close out the first half by banking in a three as time ran out to put the Trojans up 21-14 going into the break.

Three Forks would cut the lead to 25-23 in the third after four consecutive points from Peyton Page, the second basket with just over a minute left in the quarter. They would tie the game 25 with three seconds left on a Kendall Lynn layup.

Whitehall quickly reclaimed the lead in the fourth on two Jacy Johnson free throws. Kendall Lynn would tie the game seconds later with another driving layup.

Three Forks would take their first lead since 2-0 when Kinzee Howey hit a three to put her team up 30-29 with 6:20 left in the game. Clarkson fired right back to put Whitehall up 31-30. Kendall Lynn continued her strong play and drained a long three on the next Three Forks possession to put the Wolves up 33-31. Hoagland pulled Whitehall to within one with a free throw with 4:03 remaining. After Three Forks missed three consecutive free throws, Whitehall reclaimed the lead at 34-33 with two Clarkson free throws.

Up 39-38 with 1:38 left Wolfe hit two free throws to give a 40-37 remaining. Keaton Lynn was fouled on the next Three Forks possession and hit one to make it a 40-38 game. Wolfe would hit two more free throws with a minute left to give the Trojans a 42-38 lead.

Wolfe led Whitehall with 14, Clarkson had 12, Johnson added seven, Kendra Klapan had five, Britney Welker and Jacy Johnson both had two and Maxine Hoagland added one.

Whitehall would build a five-point fourth-quarter lead, but a 13-0 Forsyth run ended the Lady Trojans season in a 47-40 consolation semifinals loss.

After trailing 5-0 early to the Dogies, Whitehall fired back and scored the next eight to take an 8-5 lead. Forsyth would tie it with a three on their next possession and the game would be tied at 8 going into the second quarter.

The Trojans would quickly take the lead in the second on a Jacy Johnson basket to lead 10-8 and would stretch it to 11-8 on a Klapan free throw. The next four minutes were a battle with the Dogies retaking the lead at 16-15 with 2:50 left in the half. B Welker quickly put Whitehall ahead, but Forsyth would answer to take a 22-17 lead with 48 seconds left in the second. Clarkson pulled Whitehall to within to with 20 seconds left in the half with an eight-foot jumper. Forsyth would hit one free throw before the half and lead 23-19 going into the break. 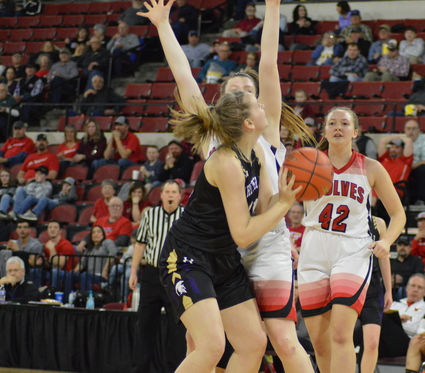 Kendra Klapan gets ready to shoot against Three Forks.

Meagan Johnson scored the first four of the quarter for the Lady Trojans to tie the game at 23. After the Dogies scored four, Johnson once again hit two baskets for Whitehall to tie it at 27. Down 28-27 Johnson scored her ninth and tenth straight point from the line to give Whitehall a 29-28 lead with 2:30 left in the third quarter. With the game tied at 31, a Johnson basket with 40 seconds left put the Lady Trojans up 33-31. The Dogieswould add a free throw to cut the Whitehall lead to 33-32 at the end of three quarters.

The Lady Trojans would stretch the lead to 37-32 after four straight points from Clarkson. Forsyth responded with a 13-0 run to take a 45-37 lead.

Whitehall would finally break their drought on a Wolfe three to cut the lead to 45-40 with 16.1 seconds left in the game.

Meagan Johnson led the team in scoring with 14. Clarkson added eight, Wolfe had six, Welker added four and Hoagland finished with one.