I spend a lot of time cooking and take pride in the dishes I create. I would like to think they are generally pretty satisfactory but every once in a great while, it can be a real disaster. Unfortunately, this has been the case a few times too many lately.

I absolutely love pizza and have tinkered with various homemade recipes over the years. I've always found that the biggest issue is getting the crust just right and believe I finally have this down.

A few weeks ago, I decided I would make several homemade pizzas and made some from scratch dough and after letting it rise was very happy with the way it was looking. I made enough for two pizzas and prepped them to get into the oven. I had decided that I didn't want to use a pre-shredded or block cheese and found the most expensive mozzarella I could find at the store. I really should have paid more attention to what I had purchased. After placing the two pizzas in the oven I checked them after a few minutes and was horrified by what I witnessed. It turns out the moisture level on the cheese was way more than I could have ever imagined and I had used way too much. It looked like I had pulled both pizzas out of the oven, taken them straight to the faucet and poured water on them for about 10 seconds. At this point, there was nothing I could do, and I had to scrap the entire dinner. They had looked so amazing going into the oven but what I pulled out was horrifying. I pouted for the rest of the evening. We ended up with take-out, which was not bad at all, but it certainly wasn't the masterpieces I had put into the oven.

I thought I had learned my pizza lesson until the other day when I picked up a take and bake pizza in Whitehall. The pizza looked great and I decided at the last moment I would pull it off the baking tray to crisp up the crust a little bit. This was another bad idea. In the process of trying to put the pizza back onto the tray before pulling it out, I dropped it on the oven door. Rather than spring to action to save dinner I just stood there like a complete moron for about 30 seconds, and finally started yelling to everyone in the house. Melissa finally ran in and tried to remedy the issue, but it was far too late. The pizza had broken apart with some remaining on the door, some falling into the warming drawer and some to the bottom of the oven. We actually saved enough to have what was more like a pizza casserole, but the damage was done. It took a few weeks before that complete mess was cleaned up. Every time we turned the oven on you could smell something new. 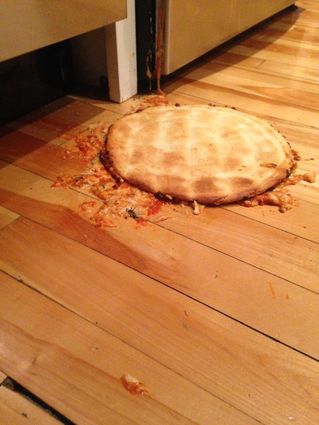 Within the past couple of months, I also went to a go-to recipe of homemade spaghetti sauce. I did what I normally do but for some stupid reason decided to "amp" it up a little bit with a suggestion I saw on a cooking show. The television personality said to finish off the sauce with a touch of cinnamon. It sounded like an interesting idea so I did it. Turns out I put in way too much and while nobody said anything, I knew exactly what they were eating. It felt like eating cinnamon toast. I won't make that mistake again. I guess you don't try to fix what isn't broke.

And just last weekend I made a pot of ham and beans. Everything was fine until Melissa and I decided we would add the bacon grease from a late lunch. It overwhelmed the soup and put a nice layer of grease. I also wasn't paying attention when I purchased ham and ended up with some sort of cheap meat that was a cross between cheap salami and spam. It did not turn out anywhere near what I wanted.

I guess the lesson I need to learn is just do what you do and quit trying to improvise --- it never ends well.