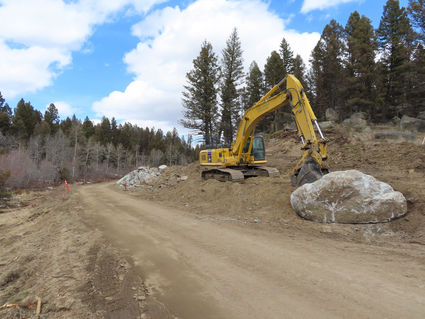 The construction project for improvements on the Whitetail Road are underway. Miles of new fencing outlines the current and new sections of the road. Heavy equipment is being used to move tons of dirt and remove enormous amounts of rock in the more northern section of the project. Anyone using the road should be aware that during weekdays there could be extended delays due to the type of rock removal being done in several sections. The road in this area is one-way only and controlled by stop lights. Photo by Arlene Weber

The Montana Department of Transportation (MDT) has begun construction on roadway improvements on 10.3 miles of Whitetail Road (S-399) in Jefferson County between Boulder and Whitehall. The project will increase safety and reduce the amount of maintenance necessary for Jefferson County by improving the roadway surface and drainage. The project is expected to be completed in fall 2020.

The project is divided into two segments. The first segment of the project starts near

Antelope Lane and extends north on the gravel surface ending approximately a half mile beyond the National Forest boundar...