The Whitehall Biological Weed Control Project is up and running this season, modified a bit of course for COVID safety. Our first order of business is looking for 8-10 Canada thistle fungus release sites. This will entail two visits to each site. One now (May/early June) to set up a long-term sampling transect. The second visit will be in September/October to infect the plants with the fungus. Many Montana sites are showing fairly severe damage to the Canada thistle patches the season after the initial release.

The Canada thistle rust fungus (Puccinia punctiformis) is being used in several western states to help control this thistle invader from Europe (the thistle it is not from Canada...). Since the fungus is a new bio-agent, all the sites will be monitored for a number of years and you need to be willing for us to collect infect plants from the site to make new inoculum for further releases around the state.

Here is how this all works.

1) Last fall (2019) the State Bio-Control Coordinator Melissa Maggio and her crew collected infected plants (dead leaves) from release sites in Montana where the fungus has established. These were ground into a powder (inoculum) that is full of fungal spores and parts. This powder was carefully stored for use in the fall of 2020.

2) We (the Whitehall Project) with your help, will identify 8-10 good release sites. These sites need a large patch (20+ meters/yards) of Canada thistle that is on a fairly moist site. The site can be irrigated and can even flood occasionally. Medium grazing pressure is fine. We will favor sites that have other Canada thistle patches close so the fungus can also start to spread naturally. It spreads naturally by fungal spores blowing in the wind. We also need easy access to the sites.

3) We will come out to the site soon, photograph it, GPS it, and set up a research transect to collect plant density data. We will also take a small soil sample. Plant density data will be taken for several years (this takes about one hour).

4) In Sept./Oct. 2020 we will come back to the site and inoculate the thistle plants with the rust fungus. To do this we will mist some water on several of the new basal rosettes (this thistle sprouts new plants in the fall from its roots) and sprinkle the inoculum powder onto the moistened thistle leaves.

5) The inoculum will then grow into the thistle leaves and be pulled down into the root system as the plants (which are usually all connected by roots in each patch) become dormant for the winter.

6) In 2021 as the plants start to grow in the spring the fungus will be spread throughout the patch. As the summer progresses, the fungus will damage more and more of the plants. The damage looks like dried/dead leaves and stems. The fungus is also damaging the roots. Over the next few years, the patch should shrink and may even disappear.

7) Each fall we will collect infected plant parts, blend them into powder, and use this powder the following fall to infect new patches. We will include other landowners in this effort, both to collect the leaves and to make new release sites.

8) If this works well, we will of course dance-a-jig in happiness!

The other two research projects we are involved in are: 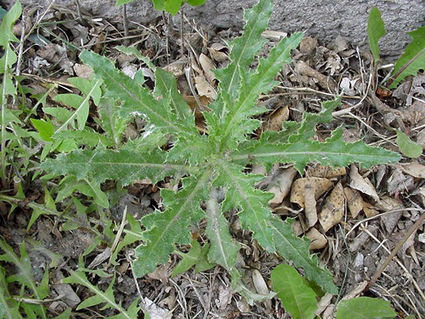 1) We are sampling Dalmatian and yellow toadflax throughout the county.

2) We are sampling houndstongue for the presence of the new root boring weevil (Mogulones crucifer - not yet officially approved for release in Montana) that may have already made its way here from Canada (where it is approved for release) and the police car moth (Gnophaela vermiculata (Grote, 1864)) that is a native black and white moth that has been found eating houndstongue (the caterpillars) on several sites in Montana.

More about these other two interesting projects in the next two weeks.

We also may soon have stem boring weevils for yellow and Dalmatian toadflax available.

When it comes to your noxious weeds, make a plan and make it so!