The Whitehall Project: Dalmatian Toadflax, Yellow Toadflax and Their Hybrids

We deal with one insect that eats Dalmatian toadflax. The insect is the Dalmatian toadflax stem mining weevil Mecinus janthiniformis. We will be collecting these in the next week if you are interested in a release for your land. We have released many of these throughout Jefferson County and in the Helena area where there is much Dalmatian toadflax. The insect is slow-acting, and we are having variable success. This small, black, slim weevil is a strong flier and has dispersed from all the releases we all have made, to most of the northern half of Jefferson Co. and most of the Helena valley area.

We are involved in two insects for yellow toadflax. The first is also a small, slim, dark colored weevil called the yellow toadflax stem mining weevil (Mecinus janthinus). It is much like the Dalmatian stem weevil mentioned above (they are very closely related and almost impossible to tell apart by sight). We may have a very few releases available soon. We are also trying to grow a second species of insect called the yellow toadflax stem galling weevil (Rhinusa pilosa) in our insectary at Whitehall Schools in special insect cages. We are doing this in conjunction with the Bozeman Forestry Sciences Laboratory. This will be our first full year growing these so, we hope we can be successful and produce some for release. There are also several other insects that attack both yellow and Dalmatian toadflax, but I will not get into them in this article as they are almost everywhere, so we do not deal directly with them.

We are looking for ten sites where we can sample for toadflax and the insects that attack them. We are doing this because Dalmatian and yellow have been hybridizing in North America and this is a problem. A hybrid is a plant produced from parents of two different species. This does not seem to happen often in Eurasia but is happening regularly here in North America. When creatures are moved to new areas, they often react in unique ways. The problem with this is the hybrids are not as susceptible to some herbicides and to the biological control insects that we work with.

Because of this hybridization problem, we are seeking ten sites where we can sample both types of toadflax and the insects that feed on them. We are doing this in conjunction with the Bozeman Forestry Sciences Laboratory. If you have either of the toadflax species (and particularly if you have both!) we would like to monitor the site and see if the hybrid is occurring. We will also sample the insects feeding on the toadflax plants and may remove a few plants for further research in Bozeman. The hybrids are variable in structure but the photo shows Dalmatian on the left, a hybrid in the center and yellow toadflax on the right. 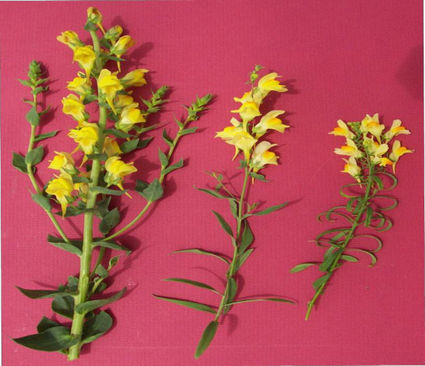 If you want toadflax bio-control insects or have a toadflax site we could monitor, please give the Whitehall Project a call: Alycia Loomis 406-565-3995 or Todd Breitenfeldt 406-498-5236. The time to do something about your noxious weeds is today!