One-hundred years ago, Whitehall was a growing community with new businesses opening, existing ones being sold and some closing – kind of like today.

In business news, Carl Smith has sold his interest in the Smith Garage to Harry Huber. Walter Hettick announced that the Pipestone plunge is open as is the dance hall, bar and lunchroom but it is doubtful that the hotel will be open this year. Mr. Lahood is selling gasoline for $0.34 per gallon and states that the drop from 37½ cents to 34 does not represent a cut in quality or an attempt to out-do competitors. Anyone wishing to test the quality of his gas is welcome to do so. Lahoods has the Dodge dealership for cars and truck, a completely equipped garage, groceries and a fine line of general merchandise.

Please note that Greene and Sons, C. M. Covert and McKay and Carmichael Mercantile Company will all be closing at 6:00 PM on weeknights but will be open later on Saturday. This will allow their employees to enjoy their evenings.

The Yellowstone Theatre has made some upgrades. They will be bringing in better quality movies from Paramount-Artcraft Pictures. The admission fee will not be changed even though the movies will cost management a lot more. It is hoped that the better movies will increase patronage and that this will offset the increased cost. If you need further enticement to spend an evening at the movies, a new serial, "The Invisible Hand", will start next Wednesday. "The Valley of the Giants" will be here soon. It stars Wallace Reid and will have a great fight scene, one of the most sensational ever filmed. 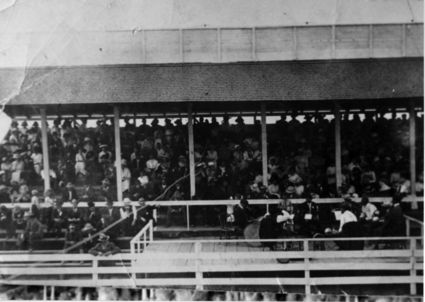 The Whitehall Band plays at the local fairgrounds. Courtesy photo

We are sorry to report that Professor O. W. Wilkins and his wife will be leaving our fine community. His daughters, Orvilla and Mrs. Olive Yaryan with go with them to Bremerton, Washington. Professor Wilkins has been in Whitehall for eight years and has been a valuable member of the community. His wife is an accomplished musician who taught piano, performed as an accompanist, and served as a member of the Whitehall Band. The Professor came from Pony in 1913 to take on our unfortunately run-down school. In his eight years here, he has built the school from a two-year high school to a four-year accredited institution. In addition, he served as the County Educational Examiner and helped to secure a new high school and gymnasium for our area.

A barn dance will be held at the Mountjoy ranch, in their new barn, to welcome home and to say farewell to two local young women. Daughter Nell is coming home from Kentucky Junior College near Lexington. She has been studying there for two years. Miss Dorothy Latham will be returning to Kansas City.

The Pipestone Bench received about 8,000 inches of free irrigation water during the recent cloudburst on Cedar Hill. Unfortunately, it also caused two breaks in the Pipestone ditch; but, they were quickly fixed.