The vandalism of campaign signs has once again become an issue in the Whitehall area.

Montana Senate District 38 Candidate Jim Buterbaugh reported the vandalism of an 8 by an 8-foot sign on the eastbound side of Interstate 90, just east of Whitehall. Along with being a sign for his campaign, the top half of the sign showed support for U.S. President Donald Trump. 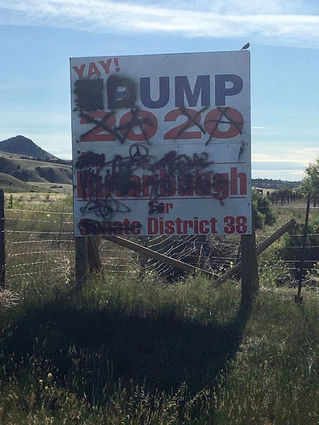 Buterbaugh said he was not surprised this happened, but very disappointed. He added that it appears someone went at the sign with a drill, grinder, spray paint, and tried to burn it.

The vandalism of campaign signs was also an issue in 2018. At the time, Jefferson County Sheriff Craig Doolittle said this always seems to be a problem during the campaign season.

" I have had several of my signs vandalized and stolen over the years from many different areas," he said.

According to Doolittle, the charges could range from theft if the signs are taken, trespassing if someone went onto private property to steal or vandalize the sign, and it could also just be criminal mischief if the sign was just vandalized but left in place and no trespass occurred.

"There are many variables in these scenarios," he said.