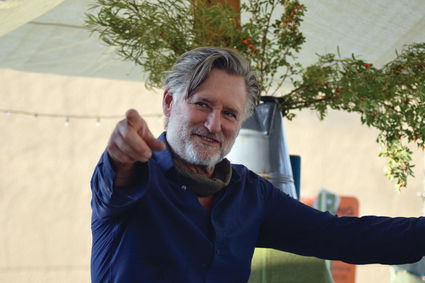 It was a special night last Thursday in downtown Whitehall with the official unveiling of Main Street Green.

The special ceremony honored those who have helped make the new "Event Park" that will soon be home to a variety of cultural events in downtown come to fruition.

The origin of Main Street Green dates back to a conversation between Bill Pullman and Star Theatre Manager Colton Anderson as they were standing three years ago in what was a bare lot on the corner of Legion and Main. Pullman said during last week's event he had always had a great appreciation for Anderson with his work running the theatre and keeping downtown active and their conversation started with Colton talking about the lot as a great place to show outdoor movies.

Pullman said the Thursday event allowed him and his wife Tamara to get a taste of how Whitehall's commercial block on Main Street felt like a town square.

"We have decided to call the lots 'Main Street Green' and posted a sign that describes its use as an Event Park.," he said.

Along with Anderson, Pullman thanked others for their work and encouragement and said helped turn a weedy patch into a bright patch of green.

"I never would have been able to do this if I hadn't had the relationships with these people. They are doers and they all made it happen," Pullman said.

Those who helped with the project were also presented with a photo book that was put together with assistance from Arlene Weber of the Jefferson Valley Museum.

Pullman feels the event park is exciting because it is the beginning of something.

"We've wanted to think of a way to allow the town to have a greater range of cultural events and we have a natural setting for it with the theatre and the park," he said.

Pullman also credited local residents Ruth Lott and Liz Pullman for their work on promoting the arts in the Whitehall area. He said Lott has been a booster and done so much, and Liz is a fantastic, energetic, committed, enthusiastic, community-spirited person who made last year's haunted house a huge success. Pullman added Anderson has continued to coordinate the building-out and maintenance of the grounds.

Lott discussed events like art films or a western series locally, something she said that may be outside the lines for the community, but there is the desire to have events like these and they can be done in Whitehall.

In June, Pullman had hoped the Covid situation would have subsided they could have staged an open-air movie screening, but with the circumstances, a group began using this period of restricted public presentations of an association to support more range of movie-related and other cultural events in downtown Whitehall.

Pullman announced the creation of the new local non-profit organization "Gold Junction Presents" who he said will be using the Fall to reach out to other interested individuals to build a plan and form a nonprofit to keep the ball rolling, adding in the next month they will announce contact info and a social media presence.

"We want to take advantage of the fact that Whitehall is in the center of the cities of Bozeman, Helena, and Butte as well as being near some bustling smaller towns. Live events uniquely presented in a small town setting could be a 'junction' for folks coming from many directions," he said. "We hope that we will emerge from this troublesome time, and bring some new vitality to our social bonds." 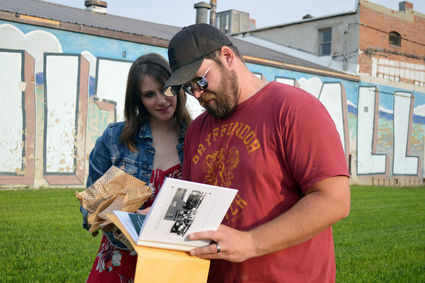 Colton and Kayla Anderson examine a Whitehall history book they received as a gift at last week's event.