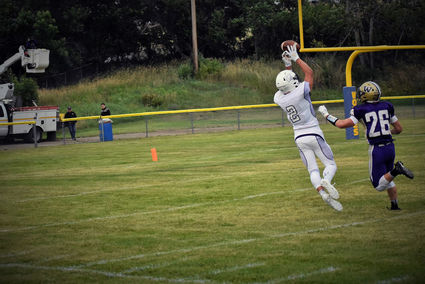 After missing out on the playoffs the past two seasons, the senior class for the Whitehall/Harrison High school football team has high hopes for the 2020 season that will begin later this week with a September 4 non-conference home matchup against rival Jefferson High School.

"We have a solid group of seniors that have truly seen the highs and lows of athletic competition. So, they are definitely battle-tested in both areas. This group still has some goals and benchmarks that they want to accomplish and making the playoffs this year has been a great motivator for the seniors as well as the rest of the team and coaches," he said.

Now in his seventh year with the program, Lacey feels a strength of the 2020 Trojans will be on the offensive and defensive line where they will return multiple starts and a ton of experience.

"They will be a huge factor in our overall success this season," he said.

On offense, Whitehall will also be looking for big things from sophomore quarterback Miles Hoerauf.

"With a year in our system, he is continuing to develop and has a much better understanding of what we are asking him to do. He is a dynamic player with a big arm and he also gives us a great running option from the quarterback position," Lacey said.

"Brendan comes back with experience and one thing that has really stood out is his leadership. He's been doing a great job of getting the younger receivers up to speed with what we are asking of them. Evan is a very versatile player for us. He will get a bunch of touches this year in the backfield as well as in the passing game. He has great hands and runs well after the catch. Flint is also a returning starter that we will look for big plays down the field from," he said.

As far as younger players, Lacey is looking for production from Parker Wagner who he said had a great offseason and is expected to contribute and wide receiver and in the return game.

"He is a shifty athlete who does a great job of making people miss. He reminds me a lot of Connor Johnson and we are looking to use him much like Connor," Lacey said.

Another younger receiver that will be a key player on offense is Michael Reiff who Lacey said worked really hard to get into the rotation at receiver.

There are also high hopes on defense for this year's Trojans, led up front by Dylan Smith and Jamus DuBois.

"These two have been really flying around and making some big plays upfront," Lacey said.

At linebacker, Lacey said Sage Buus will lead the way and he has been doing a great job of putting himself in the right situation to make big plays on defense.

In the secondary, Lacey said they will also have a solid group of experience coming back.

"On the back end, we have a solid group with some experience coming back. Brendan (Wagner) had an outstanding year at DB last year and has looked great to start fall camp. Miles (Hoerauf) will move to the Strong Safety position which has been a great addition to our help in the run game. We are looking for him to come up and make some great plays around the line of scrimmage in the run game. Trentin Walker has also had a great fall camp at the other defensive back position. He played great late last season and will see a lot of action this year opposite of Brendan," he said.

With the opening game just a few days away, Lacey said it has been super exciting to get the opportunity to get back to the practice field, and the energy and effort have been great. Our kids are super excited to go out and compete," he said.

He is also happy to add a second game with Jefferson High School after a Jefferson County Health Department order cancelled out of conference matchup for both teams.

During the first game, the Trojans will be looking to establish some depth on both sides of the ball.

"We still have some spots on defense and offense where we are looking for someone to go out and get the starting position. This will be a great opportunity for our players to go out and compete," he said.