One Pedal At A Time: Hurd Raising Awareness For Suicide 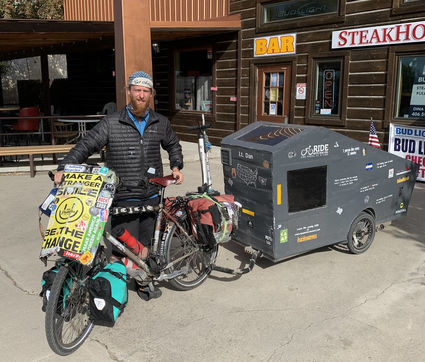 Three years ago, Daniel Hurd readily admits he was in a dark time in his life.

After being encouraged by a friend to start bicycling, Hurd has not stopped. In the past 2.5 years, he has journeyed 16,500 miles in an effort to travel to all of the Lower 48 states, with each pedal hoping to shine a light on mental health and the alarming suicide rates nationwide.

Hurd has attempted suicide three times and was thinking of his fourth when he said his friend got him on a bike and eight months later, he would begin his nationwide journey.

A Veteran of the United States Navy, the inspiration for Hurd to visit 48 states came after placing people he served with and figuring out they were spread out over 35 states that would require traveling through an additional seven states.

"What is another six states?" said Hurd Monday on a recent stop in Whitehall.

He would soon map out his journey and quickly encounter a lot of people struggling with their mental health and stepped forward to give them a helping hand.

"I started doing a lot of suicide interventions. I'm currently at 70 since I've been on this journey. A lot of that was due to being at the right place at the right time, people seeing me through social media, and even more now that I have a bicycle camper," he said.

The miles across the country also inspired Hurd to start a non-profit organization called "The One Pedal at a Time Movement" which he hopes will both encourage people to get outside and do activities, but to also look for signs of suicide. The organization is also encouraging and providing training to create suicide safe communities.

Starting the organization and helping out has allowed Hurd to escape the dark time and give back to those in need.

"This is what keeps me going. For me, it is definitely something that is worthwhile and gives me purpose, something I didn't think I had three years ago before I started bicycling. It gives me a sense of accomplishment and purpose. I never know if I'm going to meet somebody that is having a hard day and that is what encouraged me to start the non-profit," he said.

On the outset of his journey, Hurd was also jaded and felt there may not have been to many good people left in the world, let alone America.

"In the news and media, you sometimes see the bad things that happen. I started this not thinking I was going to make it through but have been blessed with people donating to my cause, sheltering me, feeding me, whatever its, he said.

Hurd is also trying to show that financial obstacles can be overcome.

"Part of my journey is doing it without savings to show people you can survive. There is hope even if you don't think there is. There is a lot of suicide today due to unfortunately financial struggles, and I want to make sure even in those tough moments, even if we don't think we can make it through, there are still good people, even if we don't believe it sometimes. In the past 2.5 years, I am proof of it. I'm still here, still healthy and being blessed every day in one way or another," he said.

Hurd made the trip to Montana after a chance encounter last summer with Pony resident Tom Elepel who too was on a journey, a five-month 2,300 mile trip on the Missouri River.

The two met sheltering from a storm in Nebraska and would camp at the same sites for the next week.

Hurd was able to visit the Green University and "River Camp" near Cardwell that is operated by Elpel and enjoyed it so much he plans to come back to the area to take a few classes.

Hurd plans on finishing his trip next Spring in Seattle and then plans to bicycle back across America to Washington D.C.

For more information on his journey, please visit http://www.ridewithdanusa and http://www.opaatmovement.com.