It was a dominating performance last Friday night for the Whitehall/Harrison High School Football team. The Trojans (3-2) had nearly 600 yards of total offense in their impressive 45-24 win over Columbus who came into the game 10th in the Montana 406 Sports Class B Rankings.

"I was extremely happy with the overall team effort of our team against Columbus. They are a solid opponent who have been putting up monster numbers all year long. It was nice to be able to get up on them early and force turnovers throughout the game," said head coach Dan Lacey.

It was a monster game for sophomore Miles Hoerauf who was 9 of 12 passing for 256 yards through the air and had another two rushing touchdowns.

Brody Becker had a phenomenal night for the Trojans with 238 yards including a 73-yard touchdown run. Hoerauf added 40 yards rushing and Sage Buus finished with 18 yards on the ground.

"We had a bunch of kids step up and perform at a high level. That was one of the best efforts I've ever been a part of. We have really talked to the kids about putting the team first and it really showed this week," Lacey said.

It will be an emotional night Friday as Whitehall will honor the 12 seniors on the roster. Jamus DuBois, Wyatt Biggers, Dylan Smith, Kobe Shields, Tucker Miller, Gryphon Lombardi, Brody Becker, Ryan Alley, Evan Wagner, Flint Smith, Trentin Walker, and Gage McMillan will all be recognized in a ceremony prior to the 7 p.m. game against Three Forks (1-5).

Lacey said he is excited to get back onto the home field and honor the seniors that have meant a lot to the program. 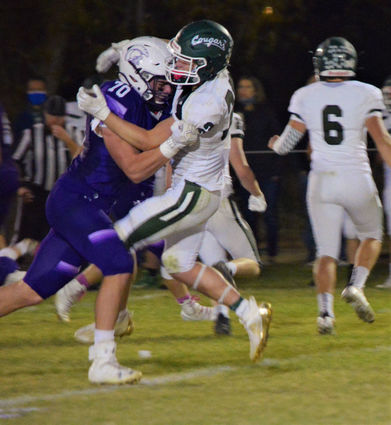 "It will be a bittersweet night for sure. This senior class has been through so many highs and lows. They got to be a part of a division championship when they first got to high school and now they are writing their own story this senior season. That's what's so awesome about sports is every year is a different chapter and each year is so unique. The growth and dedication this group has shown have been tremendous. I'm excited to see what the future has in store for them. This group has a lot of tremendous leadership and has been the biggest group of seniors I've had to watch grow through the program. I'm glad that I was able to be a part of it," he said.