The third-seeded Whitehall High School volleyball team advanced to the semifinals of the 5B District Tournament with a 27-25, 25-15, 25-21 home elimination match victory over Three Forks. 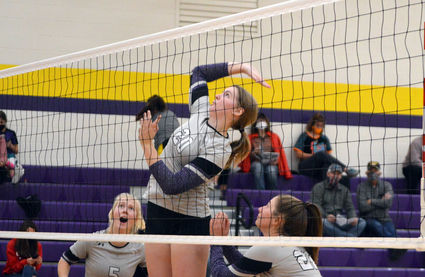 Kendra Klapan (20) had a huge night for Whitehall with a team-high 19 kills.

The Lady Trojans will look to advance to the finals Thursday with a road game against second-seeded Townsend.

Head Coach Kyla Simon said it was great to be able to get the first win of the tournament.

"I'm so proud of the girls for being ready to go despite the nerves and jitters that come with the first game of tourneys. Everyone contributed to the win tonight and it was a good team effort," she said.

"We're glad to have one under our belt and now we're ready to focus on Thursday's game against Townsend," Simon said.