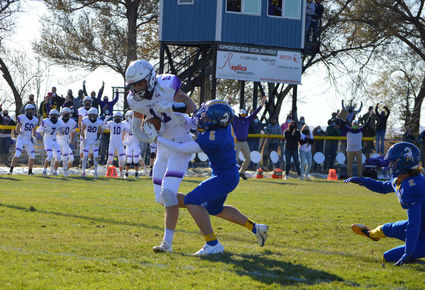 Just moments after an interception of Whitehall/Harrison quarterback Miles Hoerauf late in the third quarter of last Saturday's opening-round playoff game, a Shepherd High School defender ran to the sideline and proclaimed their defensive unit was a "no-fly zone".

With ice in his veins, the Trojans sophomore quarterback had other ideas and helped book his team a flight bound for the quarterfinals.

Trailing 2-0, Hoerauf would connect with senior Flint Smith for a 29-yard touchdown with 8:54 remaining in the game and step up big for several more bigtime completions to secure the 6-2 victory and the second-round matchup against perennial power Fairfield.

Following the game, Hoerauf said the opportunities were there all day, he just kept making mistakes and knew he had to step up.

"We got one and that's what won us the game. I'm very excited, but the party doesn't stop now, we've got next Saturday," he said.

"The thing that is awesome about him is that when he makes a mistake, he has to play defense right afterward and he doesn't have a lot of time to relive that mistake. He came up big time for us with some huge third-down throws to ice the game for us late." Lacey said.

Shepherd would score the only points in the first half on safety the first play after a Hoerauf interception at the one-yard line.

Following the Whitehall (6-2) score in the fourth, junior Brendan Wagner would put an end to a promising Mustang drive with an interception with 5:28 left in the game.

Lacey praised the play of his defensive unit. 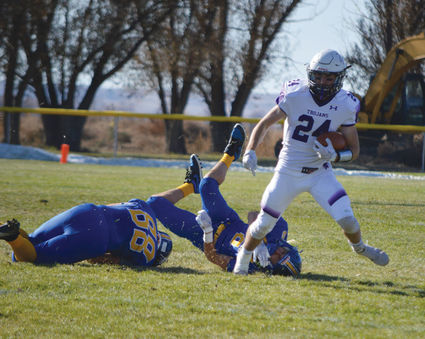 "They were lights out all night. You can't ask for anything more. They pitched a shutout. We had a great game plan going in and they did a great job executing it. Kudos to Coach (Casey) Norbeck for the really good game plan. Our coaches did a great job to get the kids ready," Lacey said. "I'm so happy for these guys. We talk about playing all four quarters and it took all four quarters today. Shepherd is a tough physical team and we stayed the course. We had a chance to win it in the fourth and we were able to get the win."

The number one seed from the East, Fairfield (6-1) opened the playoffs with a 38-0 win over Missoula-Loyola.

"It's a great opportunity to see what we are all about. They are a program rich with tradition, especially for Class B football. You go into that town and you know it's a football town. We are looking forward to the opportunity and I'm excited about the preparation," Lacey said.