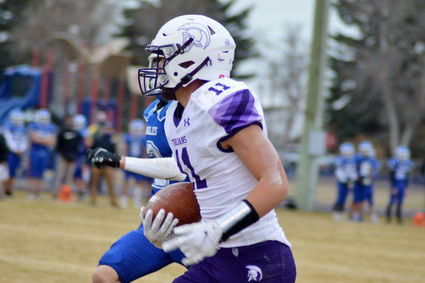 Flint Smith heads for the end zone during a 95-yard reception in the first quarter. Ledger photo by Melissa Jenkins.

A fantastic season for the Whitehall/Harrison High School football team came to an end last Saturday with a 40-13 quarterfinal loss at Fairfield.

After trailing 12-0 just three minutes into the game, the Trojans (6-3) would show their resilience when sophomore quarterback Miles Hoerauf connected with Flint Smith for a 95-yard touchdown on third and 10 to cut the lead to 12-6 with 1:47 remaining in the opening quarter.

The Eagles would answer back to up the lead to 26-6 before Whitehall would score once again on another Hoerauf to Smith touchdown, this time a 40-yard strike with 1:10 left in the half to cut the lead to 26-13.

Trojans Head Coach Dan Lacey said Fairfield did a great job early with their execution and his team took some bad angles and missed tackles which ended up turning into big plays.

"Our kids were able to weather the early storm and fight their way back in to get it to 26 to 13 at the half. We were able to make some adjustments defensively at halftime and in the third quarter, our defense forced some turnovers and gave our offense an opportunity to cut into the lead. We were inside the 10 right and the need of the third quarter and had a great opportunity to make it a 26-20 ball game, but we came up short in that drive. Like good teams do, they took advantage of our mistakes and were able to stretch the lead out," Lacey said.

Despite not being able to cut the lead in the second half, Lacey was very proud of the effort he witnessed.

Lacey also wanted to thank the seniors on the squad for their dedication to the program the past four seasons. 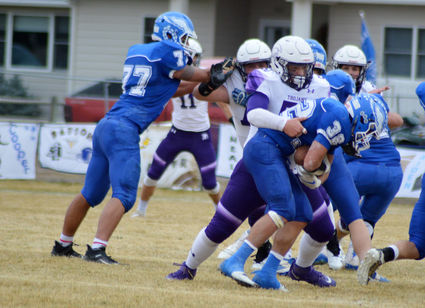 "From start to finish this group came together and really bought into what we were asking them to do. As a teenager, it isn't easy to put a team before yourself and every single player on our team did that this year. Whether it was switching positions, filming a game, cleaning up the locker room, or the bus, they did it without any questions asked. That truly is a team mindset and I'm extremely grateful for that," he said. "Lastly, I was so proud of our kids because when we were having our closing comments to one another in the locker room, when thanking each other for the great season most didn't just talk about that they thanked me for making them a better person. Football is amazing in the life lessons it teaches coaches and players and when I hear my players say thank you for making me a better person it's better than any win on the season. It shows the character these young men have inside and that's what's it's all about."