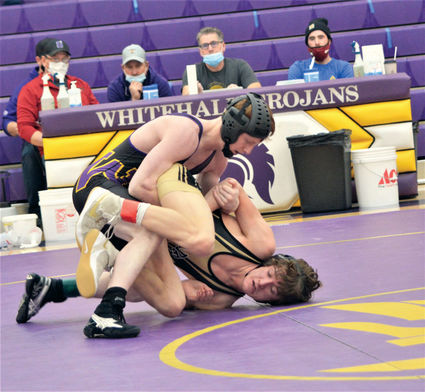 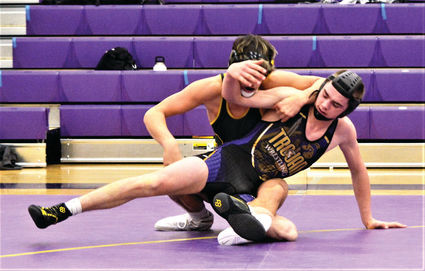 Dallen Hoover works his way out of a situation against his opponent.

Our second dual pitted Whitehall against Colstrip. With some closely contested matches, Whitehall won the dual 42-27. Those winning and gaining team points were Skogen, Lanes, Powers, Dallen Hoover, Hoerauf, DuBois, and Scafani. Others wrestling were Dane Hoover, Watson, Walker, Denny, and Kuehl. Antonsen, Biggers, Best and Skogen each won exhibition matches that count toward their records, but not the overall team score.

The second match was against Cascade. Whitehall ended the weekend 4-0 with a win of 51-18. Again the list of wins is long with Skogen, Antonsen, Dane Hoover, Powers, Watson, Walker, Hoerauf, Kuehl and Dubois all earning team points. Also wrestling were Denny, and Scafani.

This week we head to Dillon on Tue, Boulder on Fri, and Columbus on Sat.