Wrestlers Rack Up Wins in Spur of the Moment Duals

Sophomore Leo Scafani had an exciting match that revved the crowd and brought Whitehall the win.

The Whitehall Wrestling team was able to take advantage of COVID this time. Due to exposure, their matches in Townsend were cancelled. After some creative thinking and many phone calls, teams were invited to Whitehall on Friday. This lead to some good wrestling against Thompson Falls and Fairfield. Whitehall started with a dual against Fairfield. When the dust settled, Whitehall came away with a 48-15 victory. Matches started with Isaac Skogen, Dallon Lanes and Michael Reiff receiving forfeits. Dawson Powers lost a tight match 8-9. Gavin Watson lost his match, before Trentin Walker and Dallen Hoover won by forfeit. Miles Hoerauf and Kyle Denny both secured pins, followed by a loss from Jamus DuBois, and an exciting overtime pin by Leo Scafani. DuBois stepped up to wrestle another Fairfield opponent and won 10-5. Scafani also had a second opponent who he pinned in the third period.

The next dual pitted Whitehall against Thompson Falls. Whitehall again won, this time 54-14. Again, Skogen and Lanes won by forfeit, followed by a pin by Reiff. Powers and Walker sustained losses, balanced by 3 Whitehall pins: Nick Denny, Hoover and Hoerauf. The evening closed out with Kyle Denny, DuBois, and Scafani winning by forfeits.

Saturday the team headed to Superior to wrestle them and Mission. Mission is low on numbers, but they gave us some good matches. Skogen and Biggers lost their first matches, followed by pins each from Powers and Walker. Dallen Hoover had a dominant 14-0 match, followed by pins from Kyle Denny, DuBois and Reiff. Best lost her match as well as Watson's close 6-9 match. 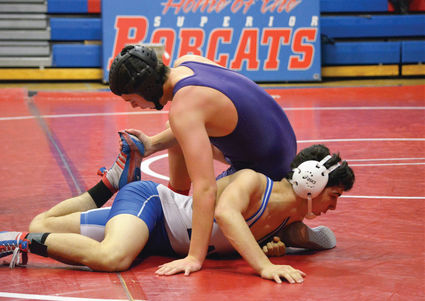 Sophomore Karson Klapan twists his opponent into position at the dual.

The dual of the day was against Superior, where the back and forth scoring came down to the final match. Scafani was able to earn his 3-2 win and secure the victory for Whitehall 39-35. The dual started with a loss from Skogen, Antonsen, and Reiff, before Whitehall picked up three forfeits. This was followed by pins from Dallen Hoover and Miles Hoerauf. Kyle Denny lost his match and Whitehall had to forfeit a weight class. This put Superior in the lead 35-30. DuBois pinned his opponent to give Whitehall a one point lead. The crowd knew the outcome of the last match would determine the winner. The energy in the gym was palpable. Scafani got the win and secured the victory for Whitehall.

Additional matches against Superior included two losses by Klapan, loss by Lanes and Biggers, and a win by Scafani.