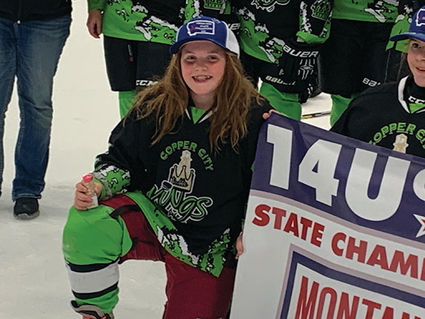 Carley Ryan plays for the U14 Girls, who also won the state title.

While basketball and wrestling finished up this weekend for school teams, the hockey season is still on for a few Whitehall players.

Carley Ryan played in a three game series February 26-27 in Butte and Bozeman. Her team, the U14 Girls Copper City Kings won 2 of the three games and brought home the state title.

Carley's brothers, Jacob and Noah Ryan, played for the Butte Copper City Kings in the Peewee B State Championship this past weekend and won the title as well. This tournament was a four game fight in Glasgow and Great Falls.

Kieth Wilson plays for the Butte Copper City Bantams and...